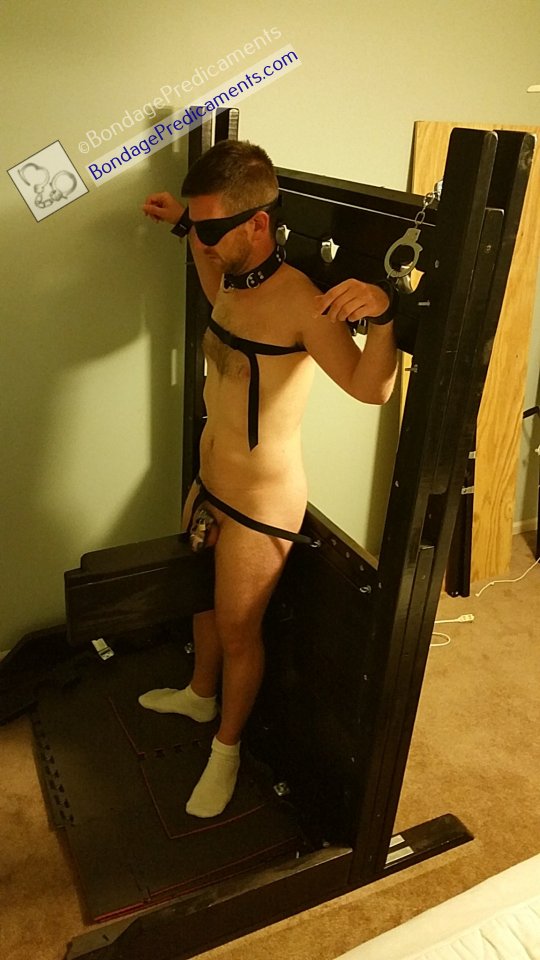 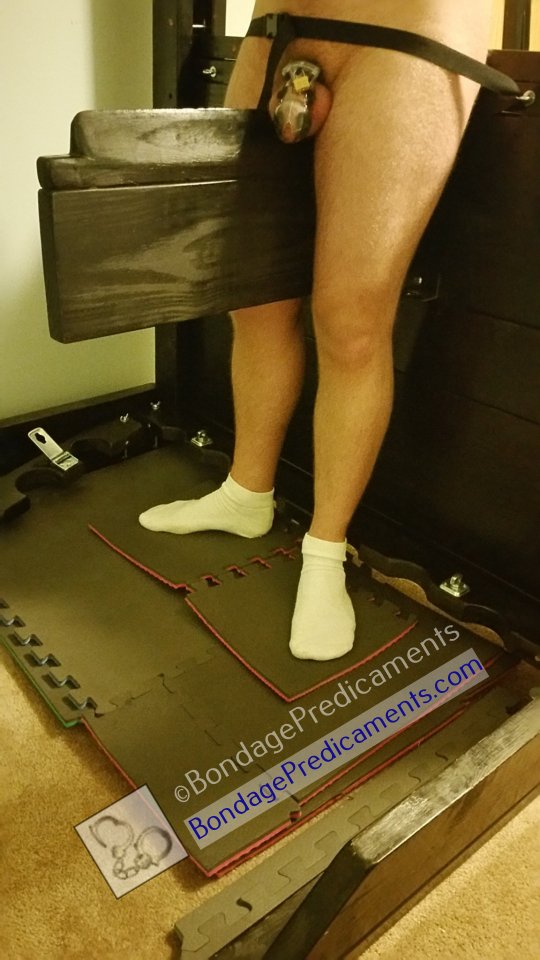 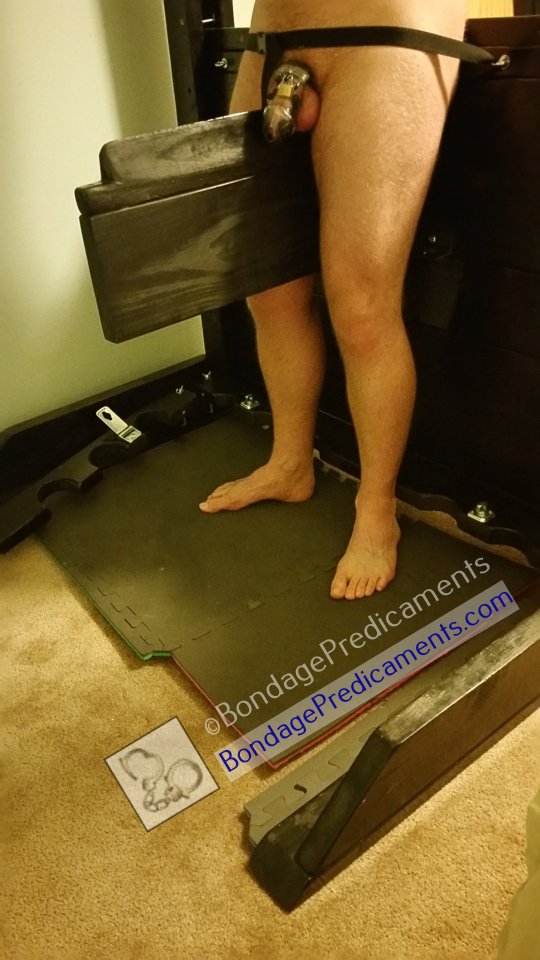 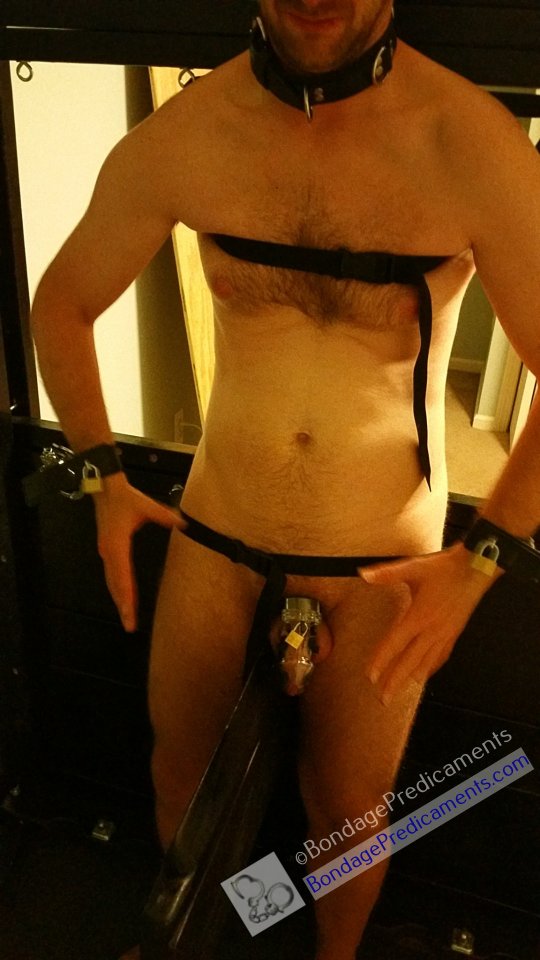 When hushpuppy1980 visited recently, he was here for most of the week.  I certainly couldn’t let him get bored while he was here.  So I came up with several ideas to keep him “entertained”.  ;-)  He had stopped by the week before, and I locked his dick in a chastity cage.  After more than nine full days of being denied and a few other session in the playroom, this is how his Friday night went…

I made him straddle the wooden horse on a few layers of mats that I had previously prepared on the floor, cuffed his hands up high almost in a spreadeagle position, and used a few of the adjustable quick release straps that I got recently to make sure he couldn’t move around much on the wooden horse.  The straps are very versatile, safe (one quick motion releases them in case of emergency), and they would also help later when I reveal the little surprise that I had prepared.

But what good is a chastity cage with electro attachments if you don’t connect it to a power box?  So I hooked up my Zeus Digital Power Box, and gave the chastity cage a test run.  This power box has several patterns to choose from and several strengths for each.  It also has an intensity button that can switch between low and high intensity.  Many actually find the higher intensity smoother than the low, not quite what you’d expect.  There are a few patterns that are smoother and easier to handle in my opinion, so I went right to those.  Hey, I’m not always a mean Dom…I can be nice too!

Although this boy isn’t opposed to estim play, it seemed to hit him hard…startled him, maybe almost scared him at times.  So after taking him through a few different patterns, I decided to turn that off and move on to something else.  Besides, I had much more that I had prepared for this session, and I planned to use it!

He wasn’t quite feeling the wooden horse to it’s full effect.  So I decided to remove one of the 3 layers of mats.  Then I removed his socks, to make the surprise I planned more effective.  He was still looking a bit too comfortable.  I certainly didn’t want him falling asleep on me, so I removed another layer of mats.  That got his attention.  His hands cuffed up high were getting a bit cool, so I brought them down where he could rest them on the bondage wall (circulation is a good thing!).  I also cuffed them so they were just out of reach of his caged cock.  At this point it was pretty much filling the cage.  There were slots where he could’ve touched it, stroked it, pleasured it…something it so greatly desired at this point.  If only he could reach it…but I locked his hands in a way that left them mere inches from his cock.  Check out the pic above where he’s trying to reach his cock…oh sooo close!  <evil grin>

Was I planning to give his cock the attention it so desperately desired?  What was the surprise I had in store for him?  Check back tomorrow for part 2 to find out.  (Everyone loves a good cliff hanger, right?  As long as you don’t have to wait months for the conclusion…)  ;-) 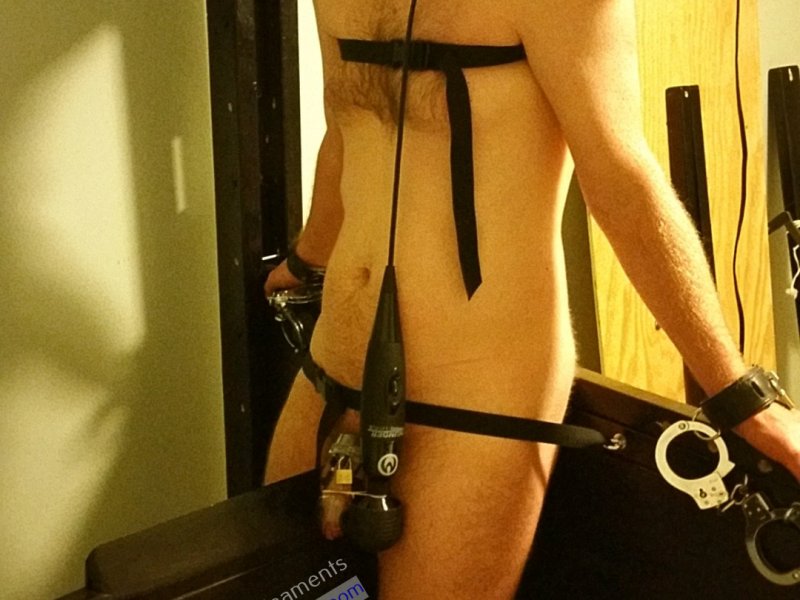 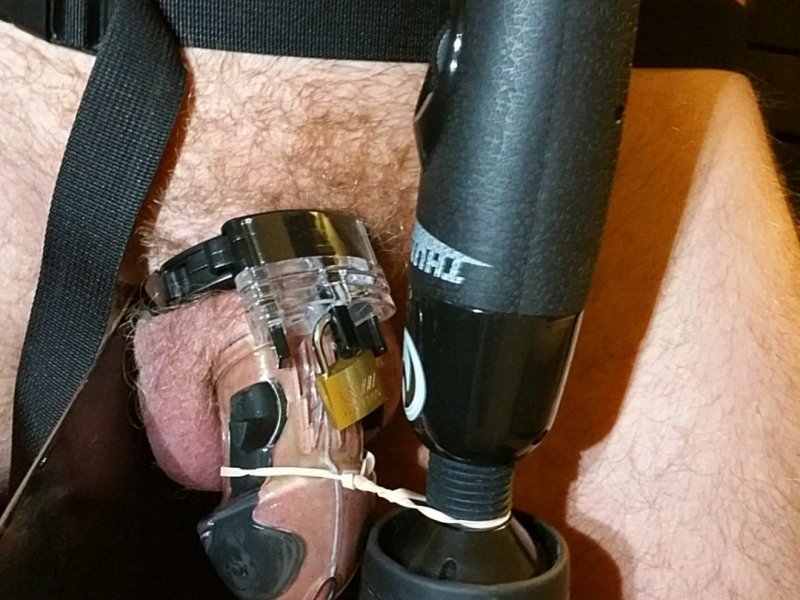 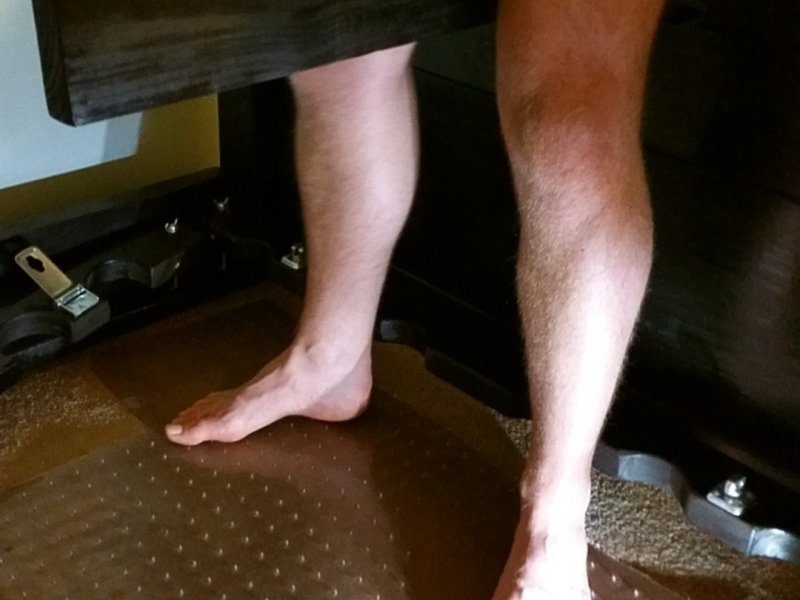 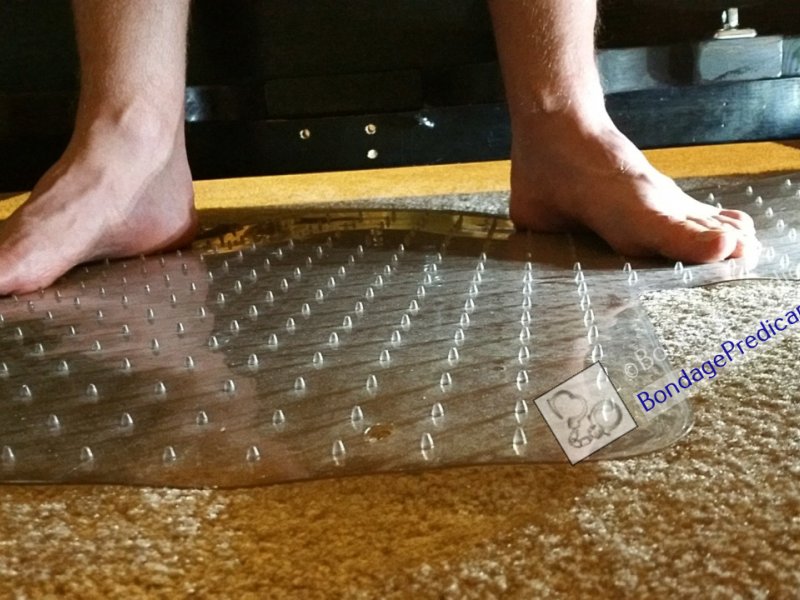 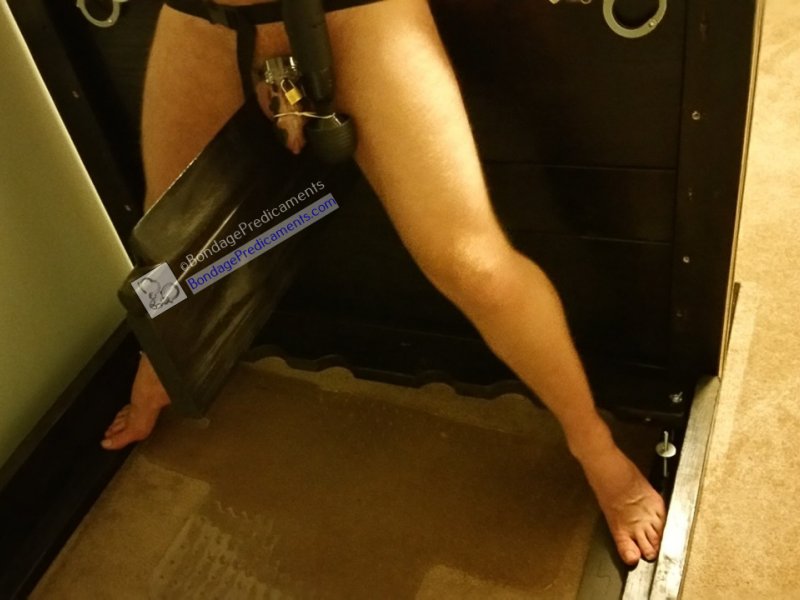 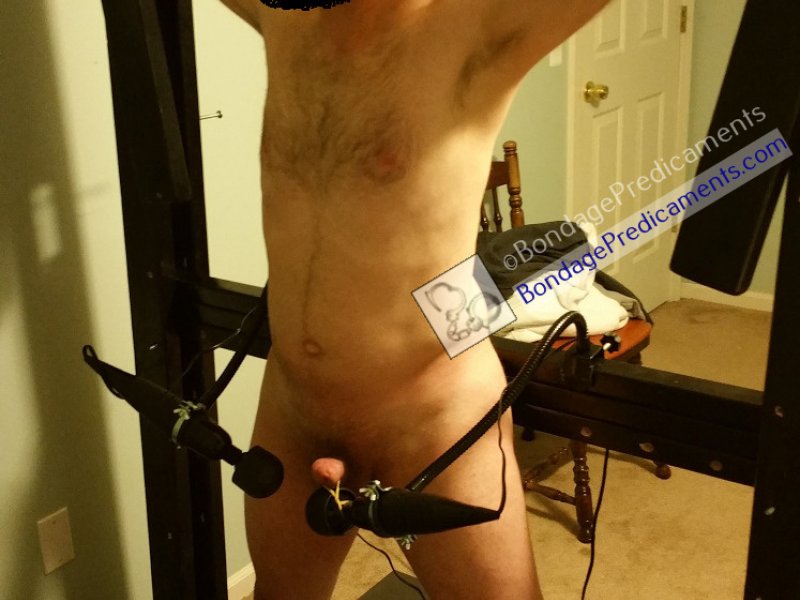 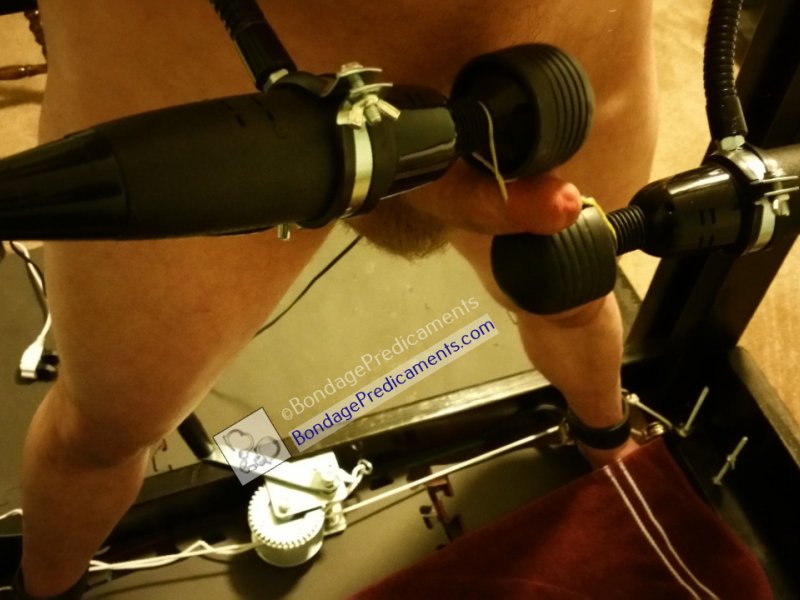 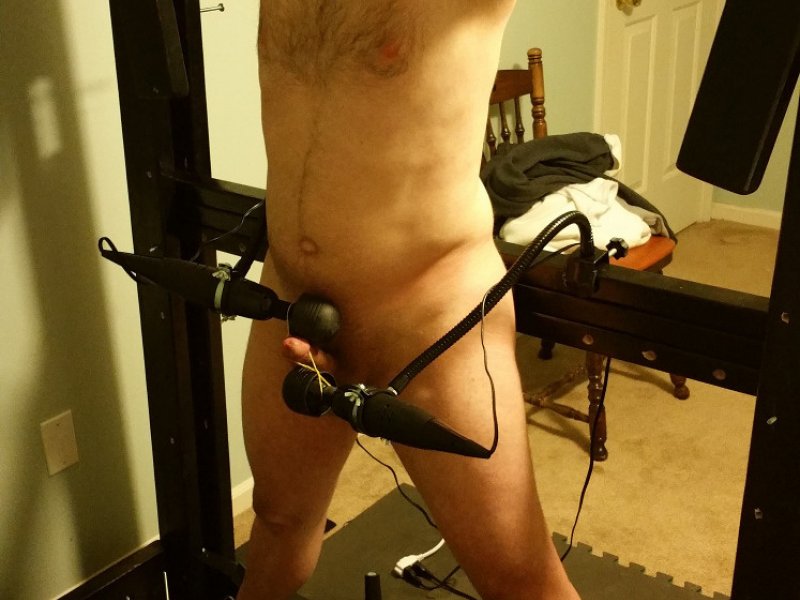 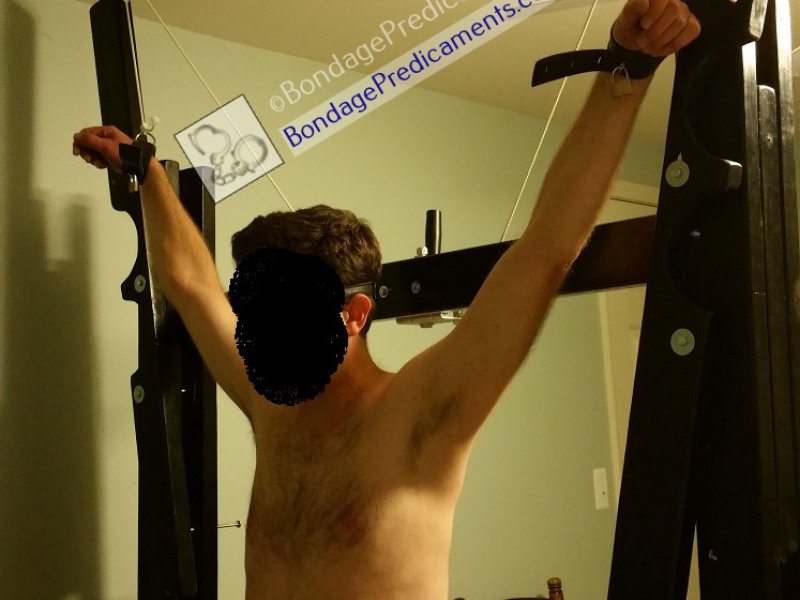