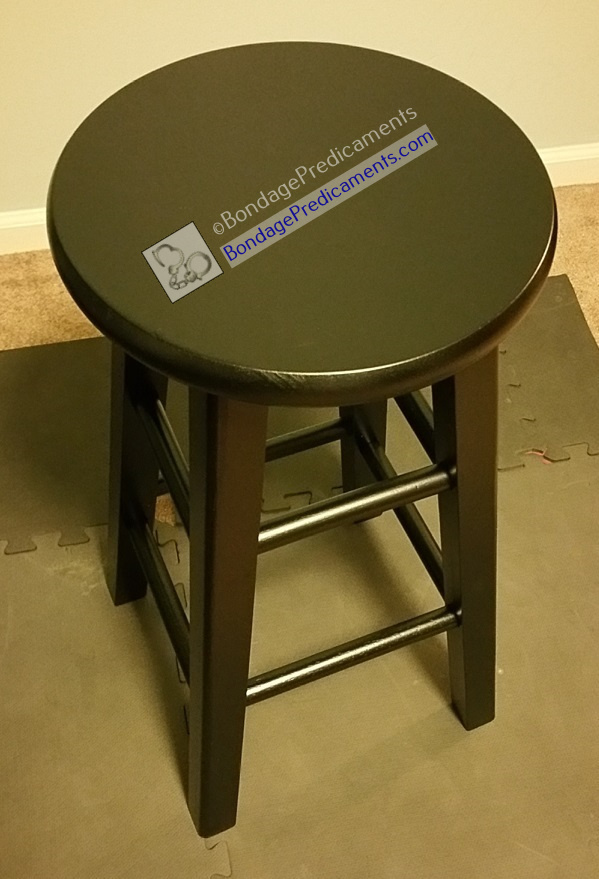 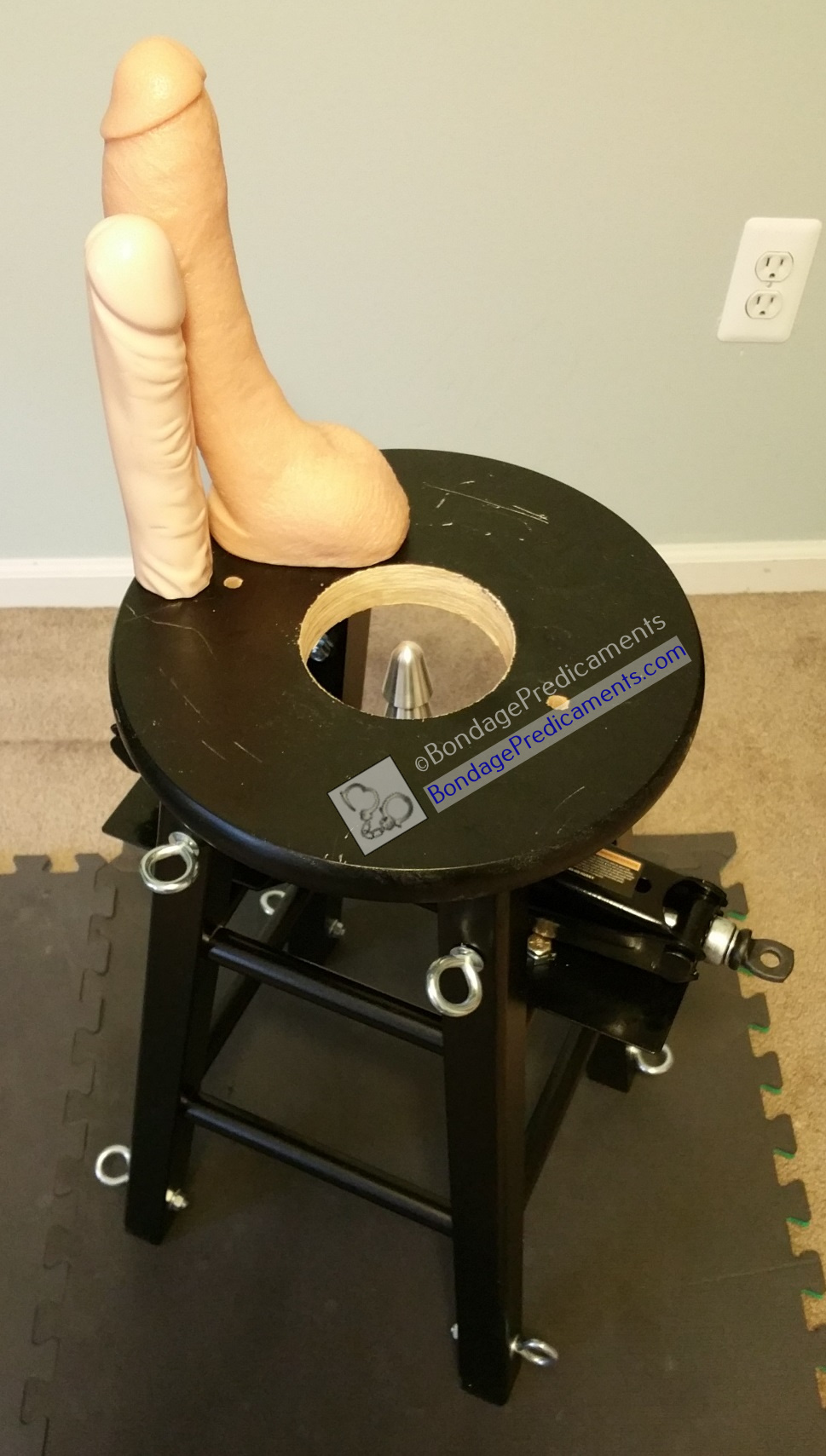 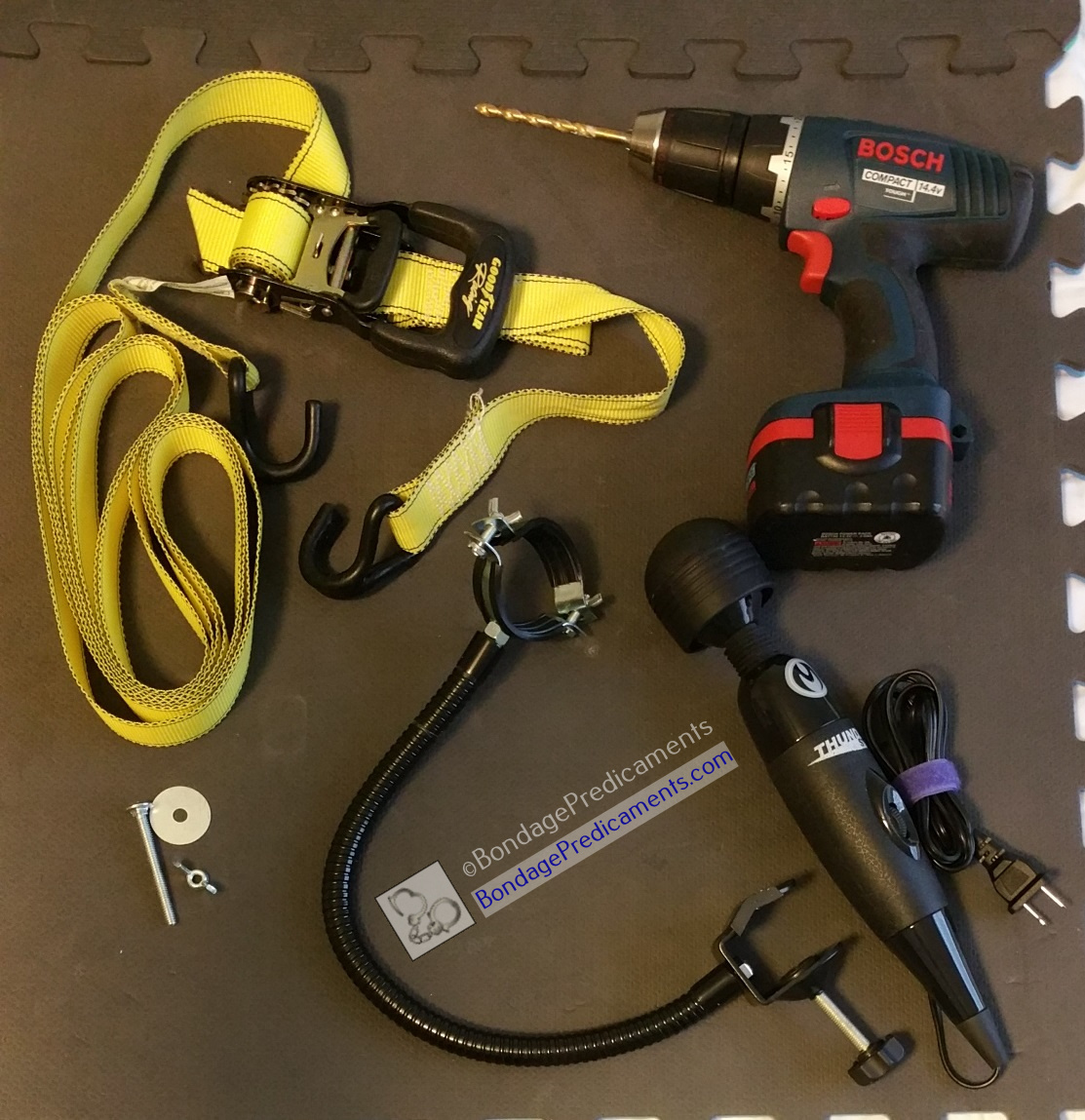 Here are three additional examples of how you can use your bondage stool. There are many more, but this post was getting too long, so I'm including 3 for now. Feel free to send me a message if you've built a bondage stool and are looking for additional ideas specific to your environment/gear/restrictions/etc. I'd be happy to help if I can. ;)

You'll need to complete Part 1, Part 2, and Part 3 of this tutorial series in order to effectively implement the add-ons in this part.

Specific to this week’s tutorial, make sure your sub is balanced on the stool and that it doesn’t tip over, especially when he’s tied/cuffed to it. Although it’s sturdy, anything is possible. Safety first! As always, be very careful when using power tools. Take the necessary precautions such as wearing safety glasses. Also, when using the dildo jack, be careful, adjust things slowly, and don’t use it on a sub unless you’re very familiar with his limits and have a pretty good idea of what he can handle. Again, it’s all fun and games until somebody loses their ability to walk straight! ;)

Expand your ratchet tie-down so you can easily access the bottom portion of it.

Using the ratchet tie-down as a guide (and preferrably a sub to sit on the stool so you can better judge the best location), mark a spot where you're going to slide a bolt through in order to secure the device to the seat of the stool. You'll want the strap winding on the ratchet facing toward the outside of the stool, and the ratchet handle just under your sub's dick/balls when he's sitting on the stool. 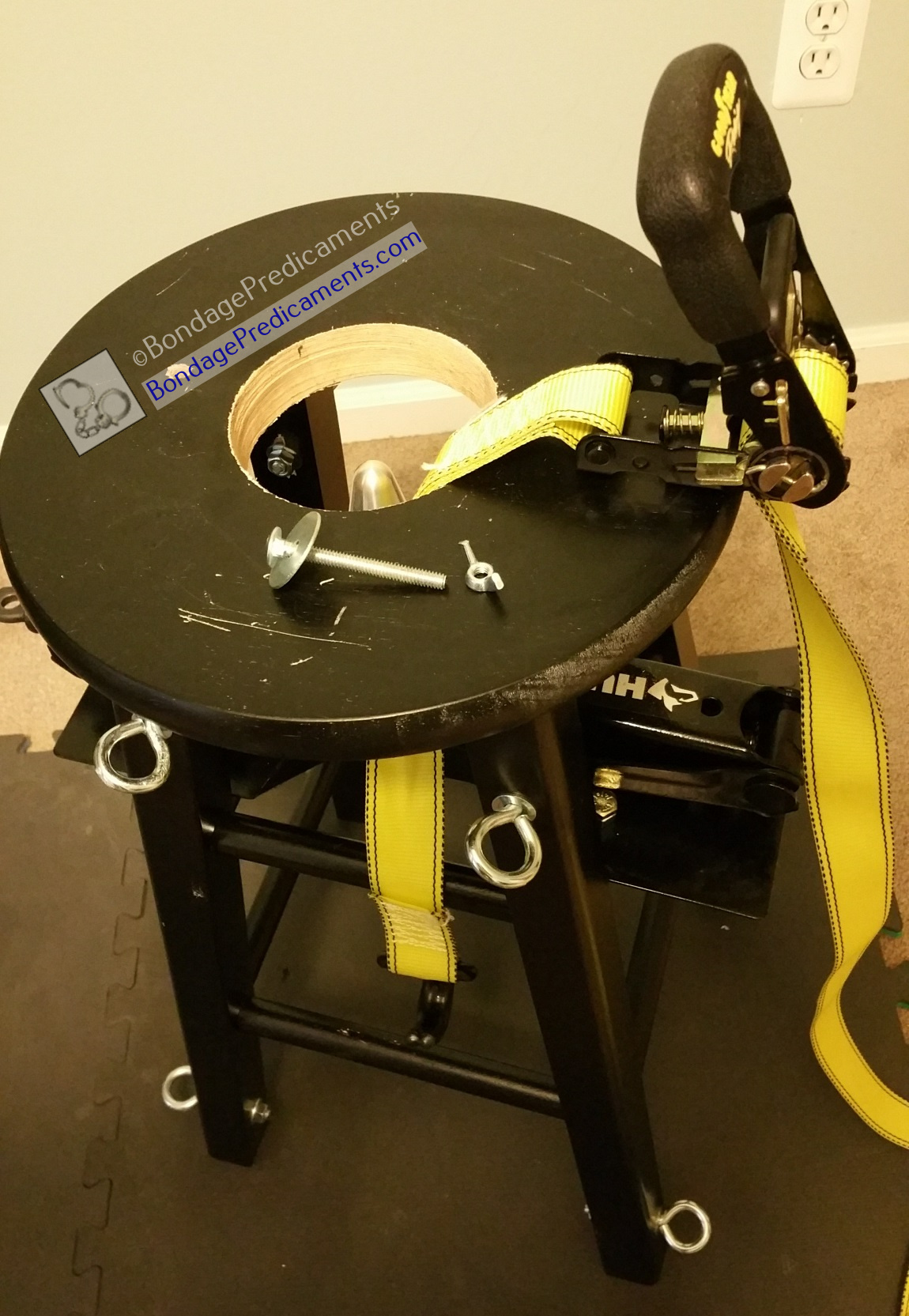 Drill a 1/4 inch hole in the spot you marked. 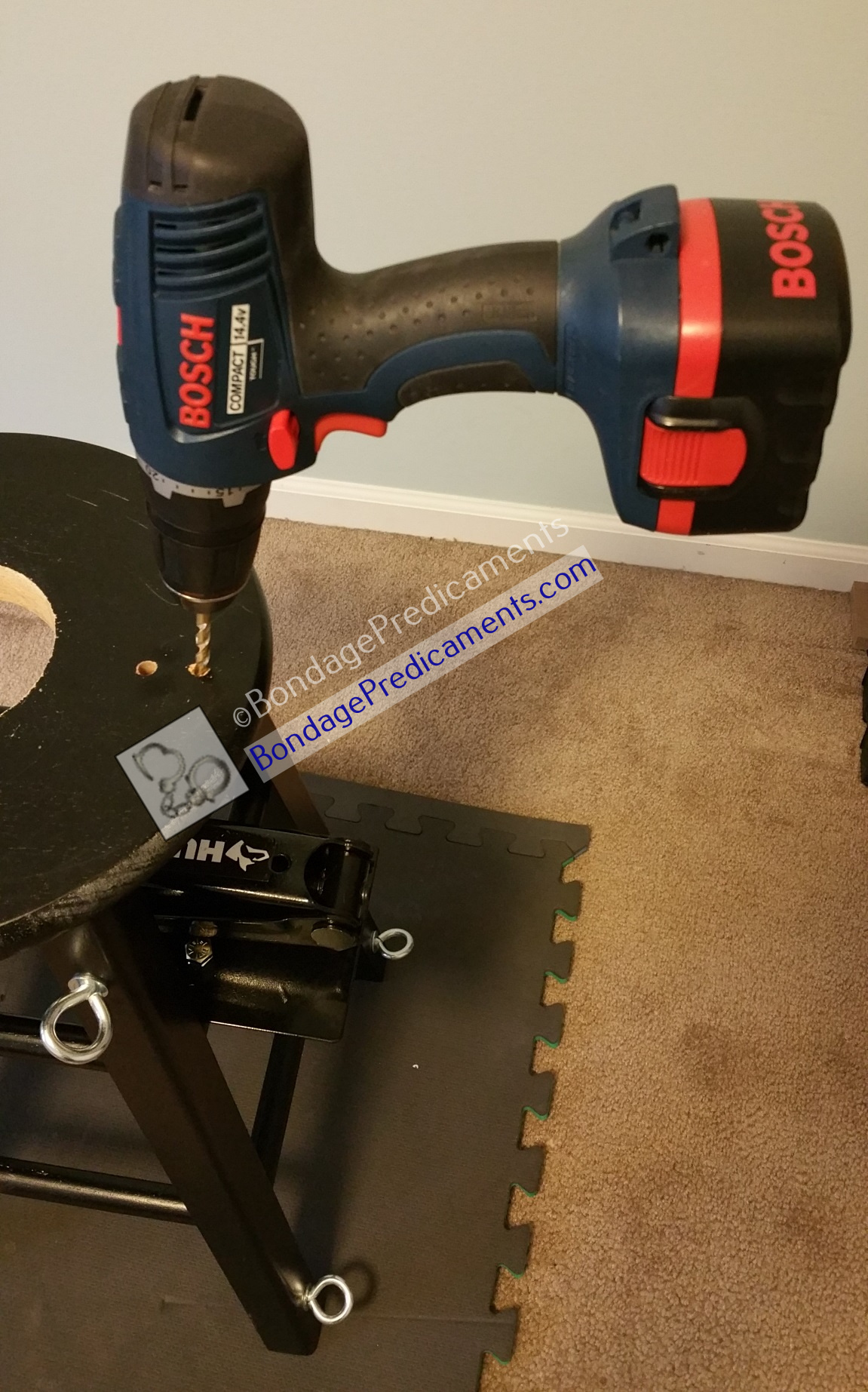 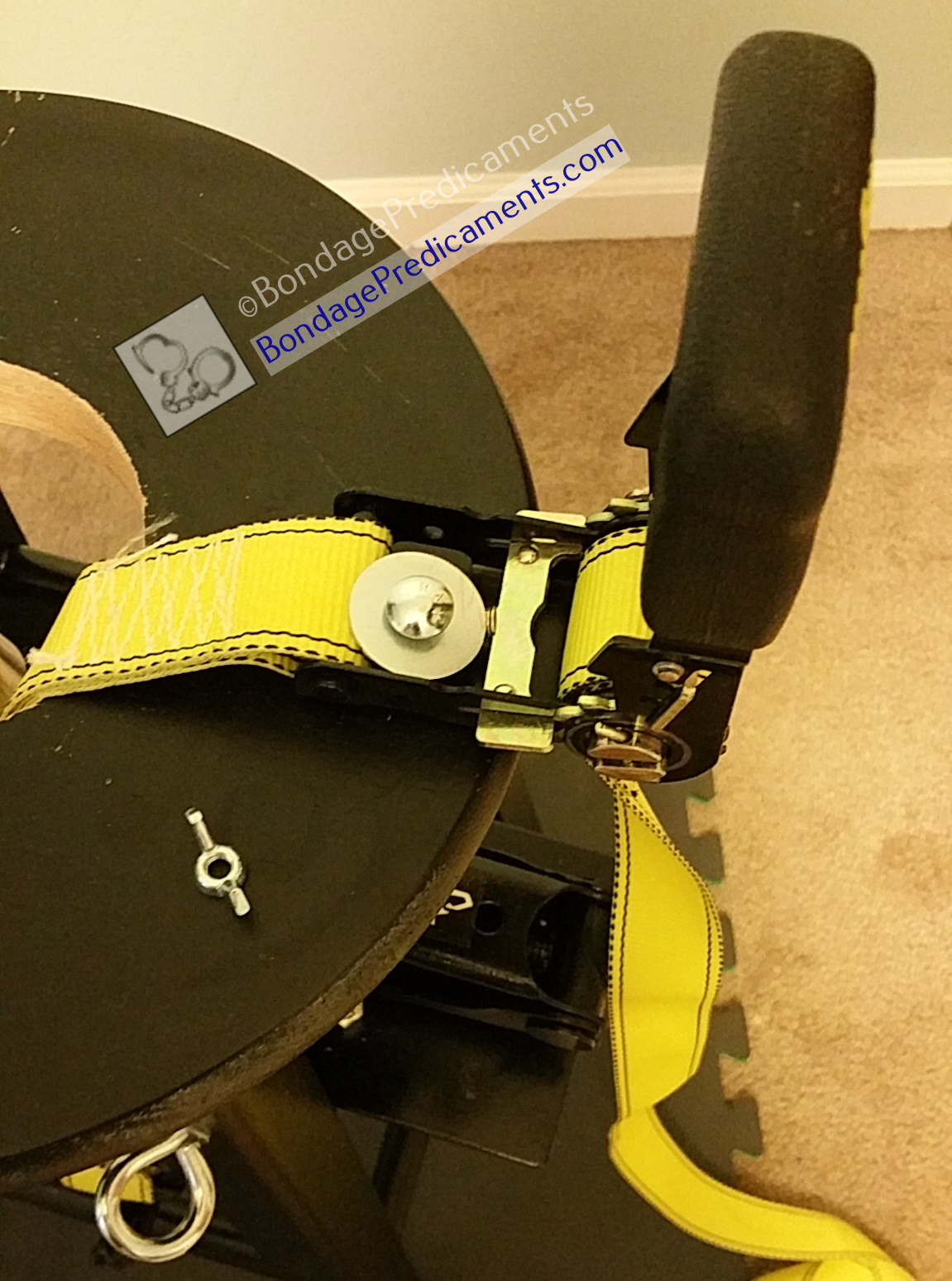 Depending on your setup (the angle of the stool, where you end up feeding the ratchet strap, etc.), to make things work more smoothly, you'll probably want to feed the straps through something so they don't bind up. I used a simple carabiner clip fixed underneath the stool where the ratchet was mounted. If you choose this method, just take a large carabiner clip, put the narrow end under the stool, then use a large washer and wing nut to secure both the carabiner and ratchet in place. Then feed your ratchet straps through the wider end of the carabiner clip to avoid having them bind up from being wound at an awkward angle. 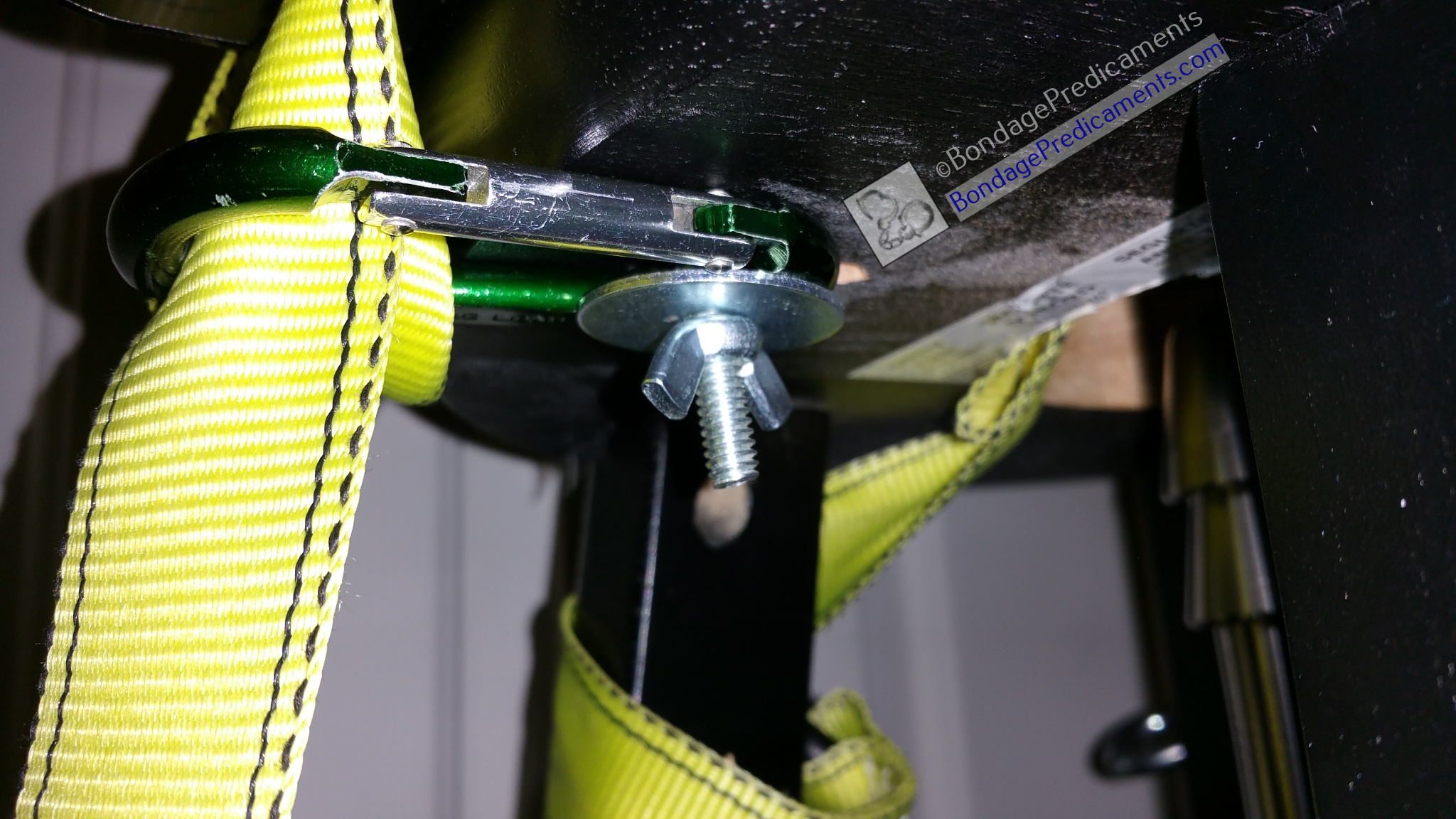 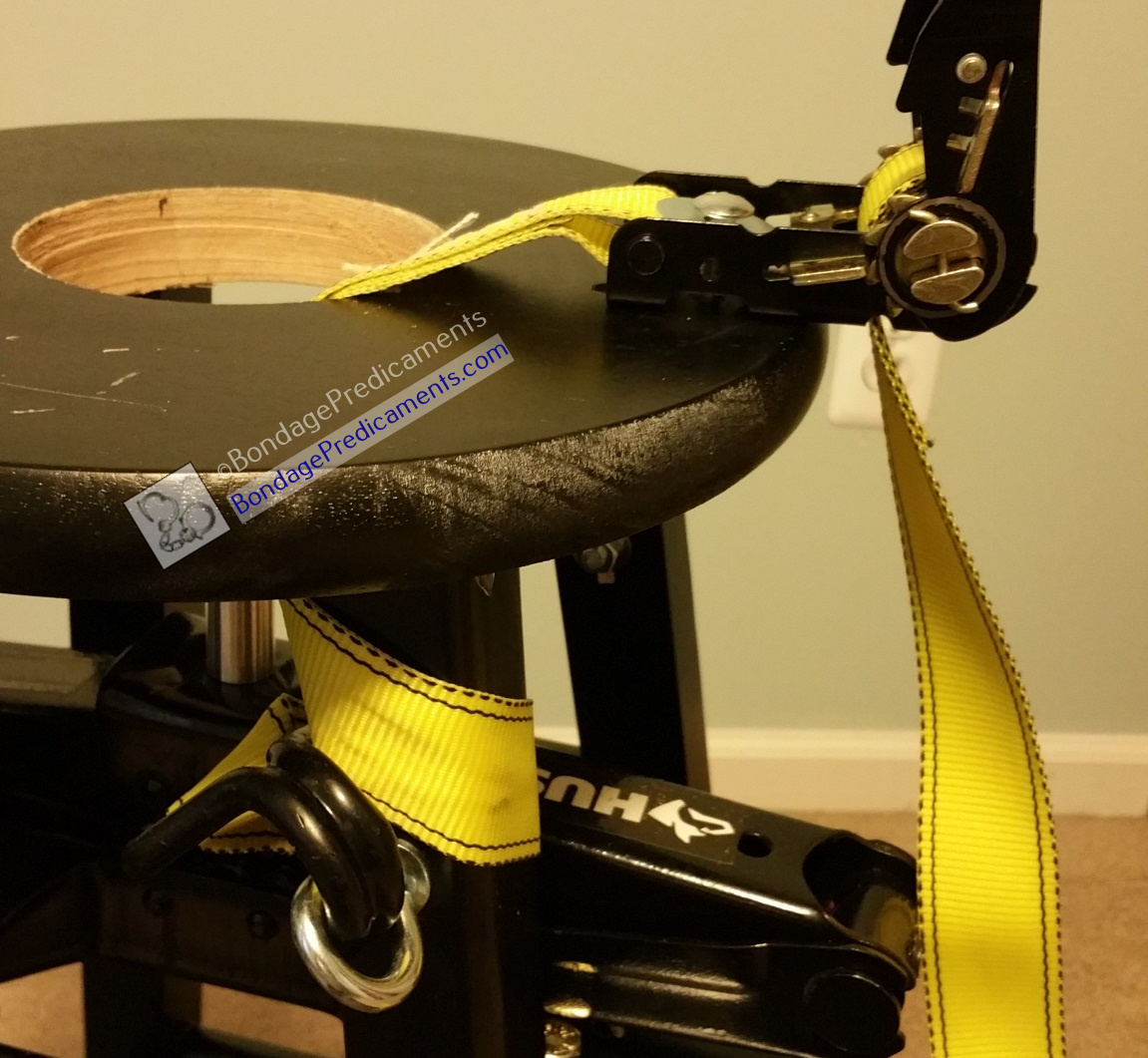 Prepping a system to run the ratchet strap through:

There are many ways to do this, but I tried to show a method here that doesn't require a dungeon, a basement, or really anything special. You should be able to do this in any house, apartment, rental, etc., and it shouldn't damage walls or ceilings (just be careful to be sure).

Take a long piece of rope, or a thin rope ratchet hanger (which is what I used here, just make sure you can loop it over a door and close the door), and tie the loose rope end to a door knob outside the room you're doing this in. 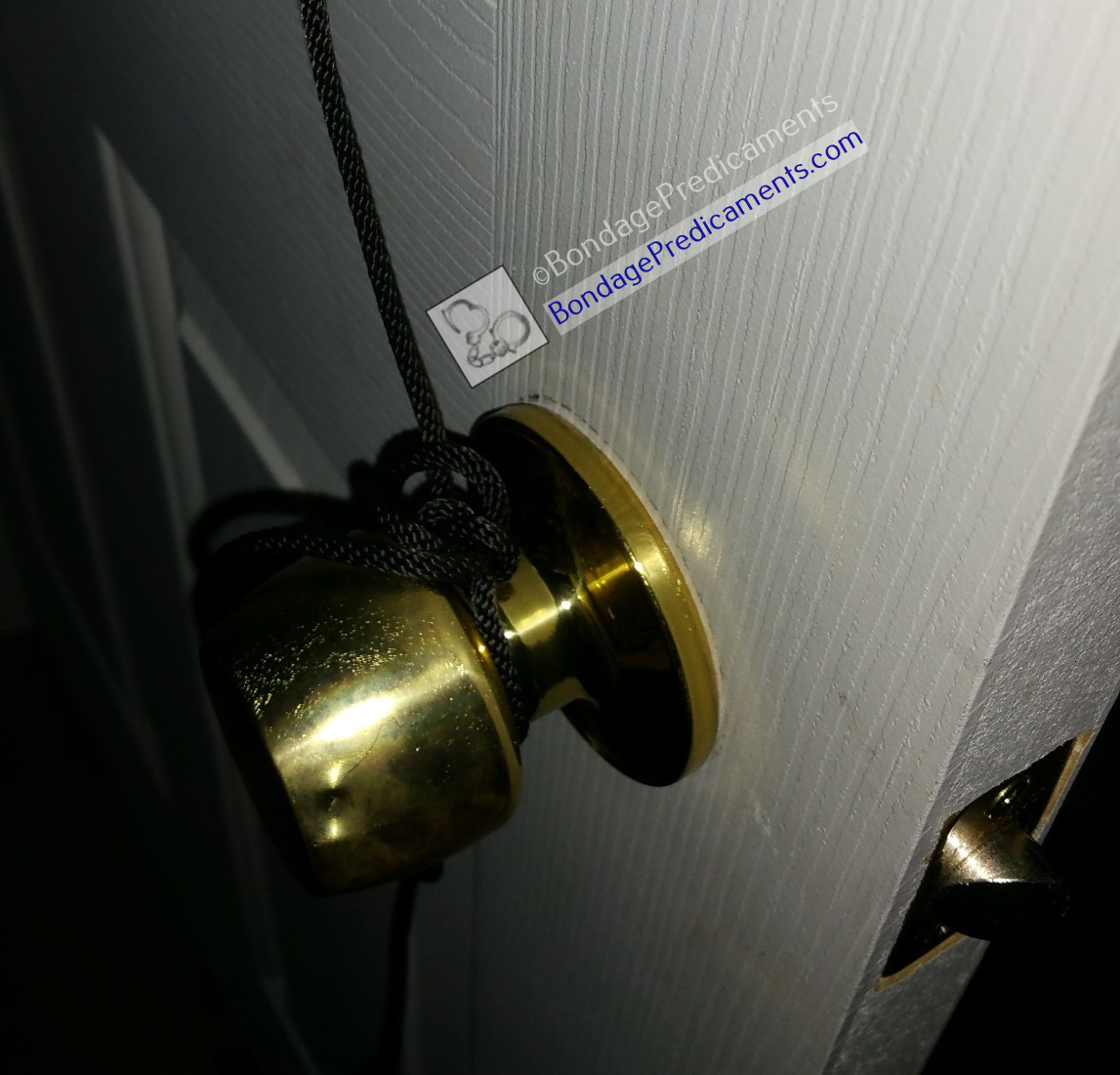 Then run the thin rope up over the top of the door, and let the rest hang down the other side. 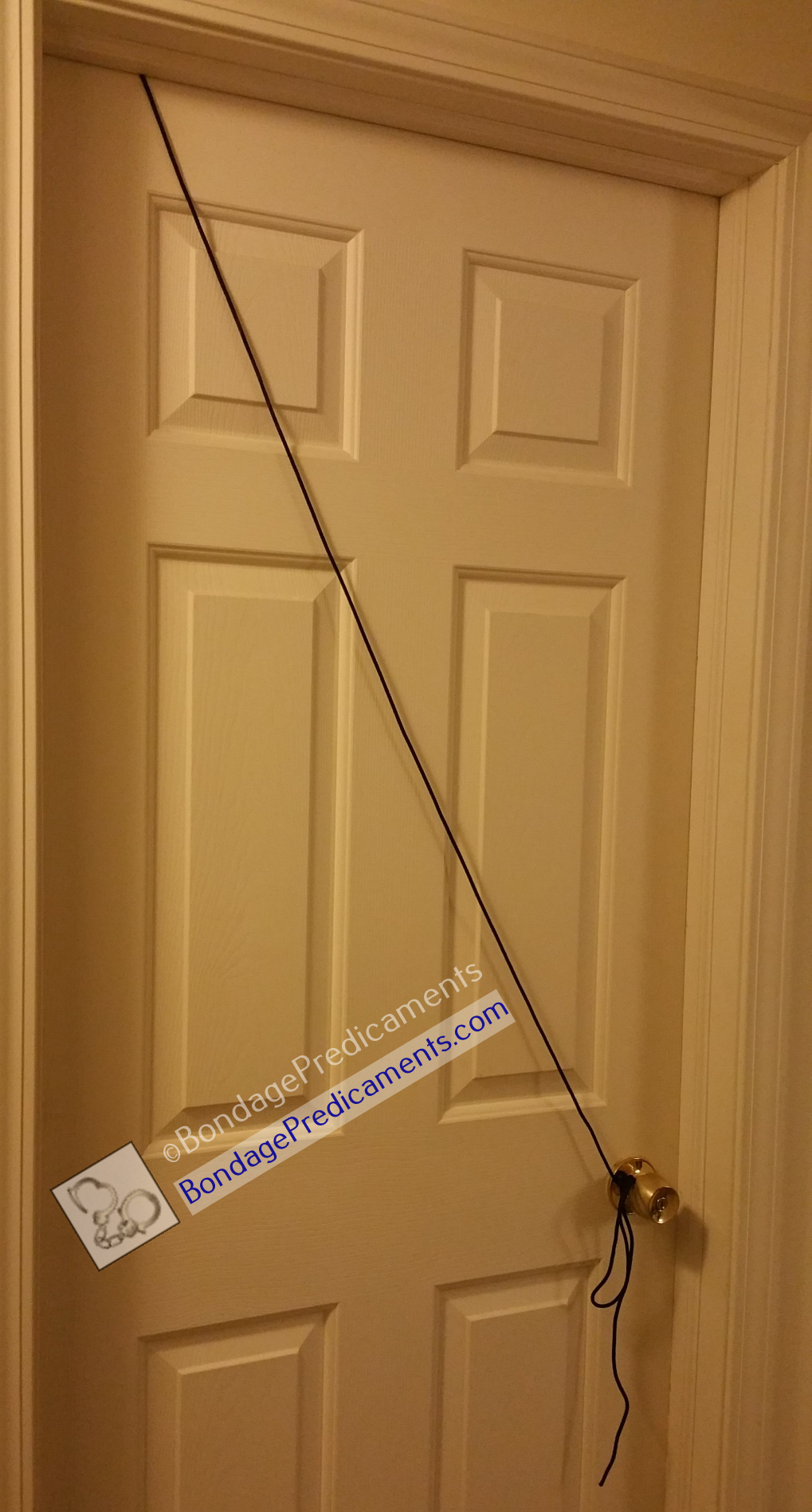 Use fairly loose rope or a similar method to create a loop that your larger ratchet tie-down strap can freely slide through. (Again, there are many ways to rig this, this is just one example.) 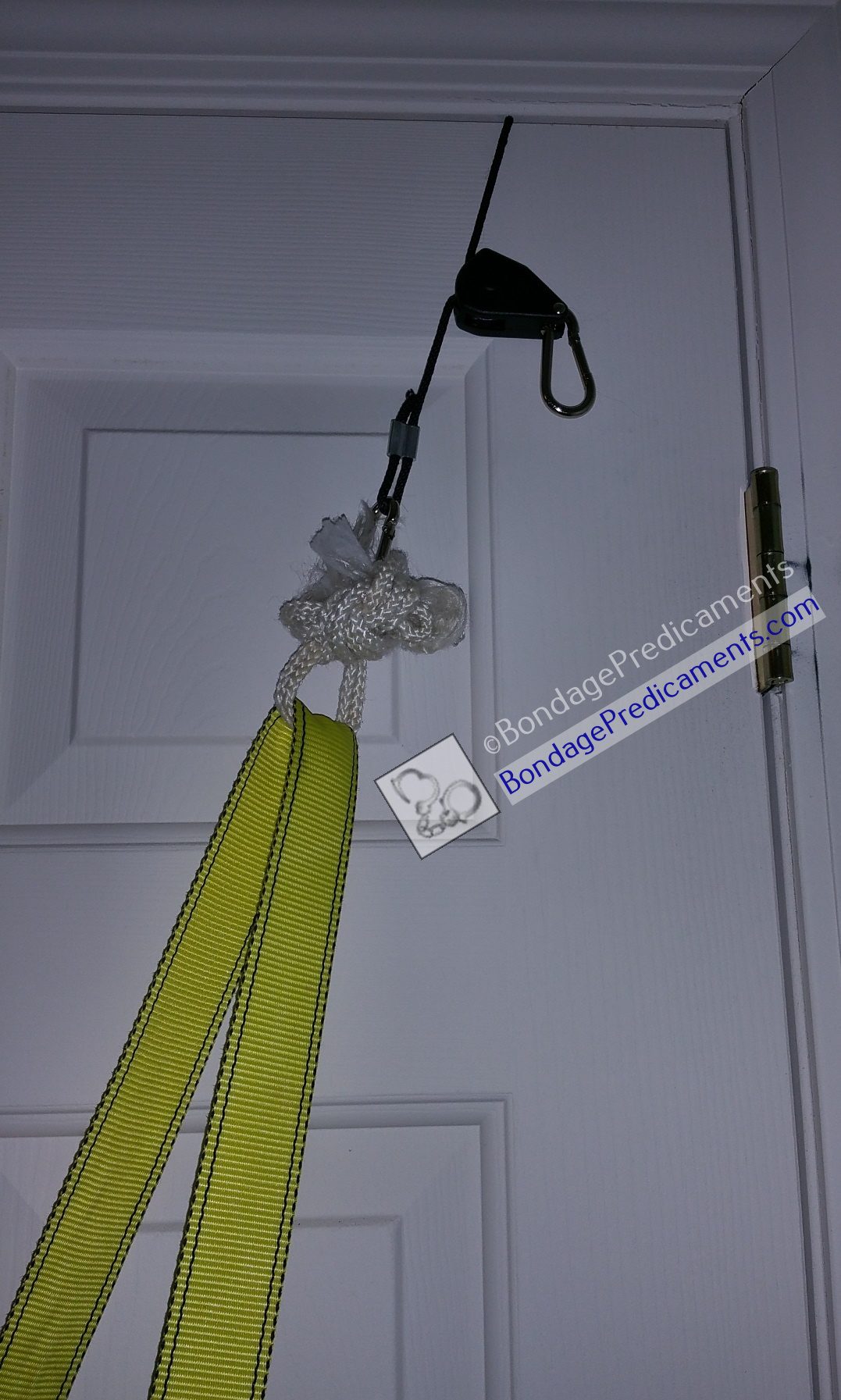 Next, I used another thin rope ratchet hanger hooked to the larger ratchet tie-down as my point to hold the key to the handcuffs I used. Use whatever you want, but the goal here is to use something that will hang over the door handle without easily sliding off it until it's pulled over the top of the door handle. 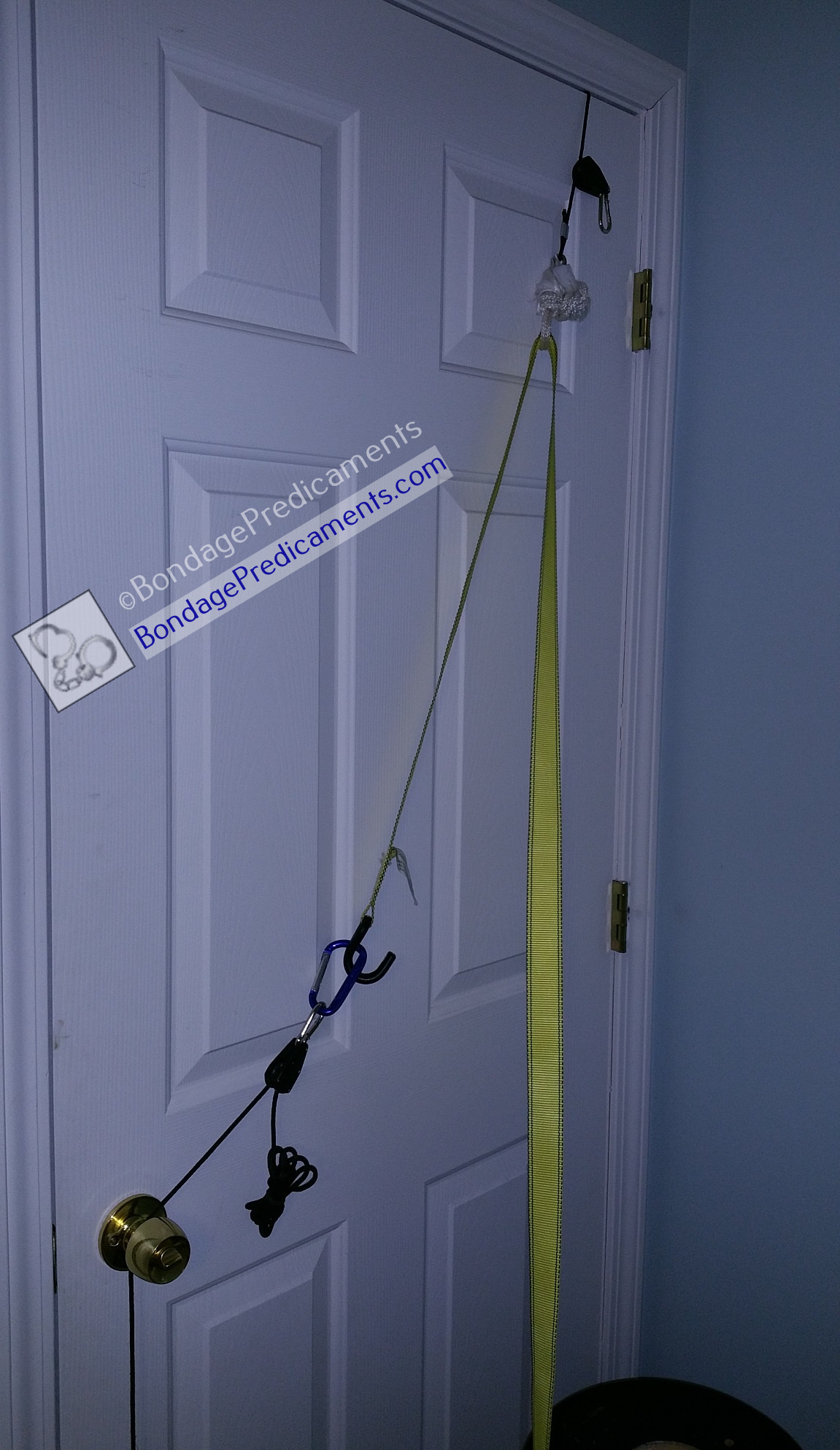 I ended up having to weight the end down a bit, so I just attached a heavy padlock. Clip the "escape" key to the end of this line. 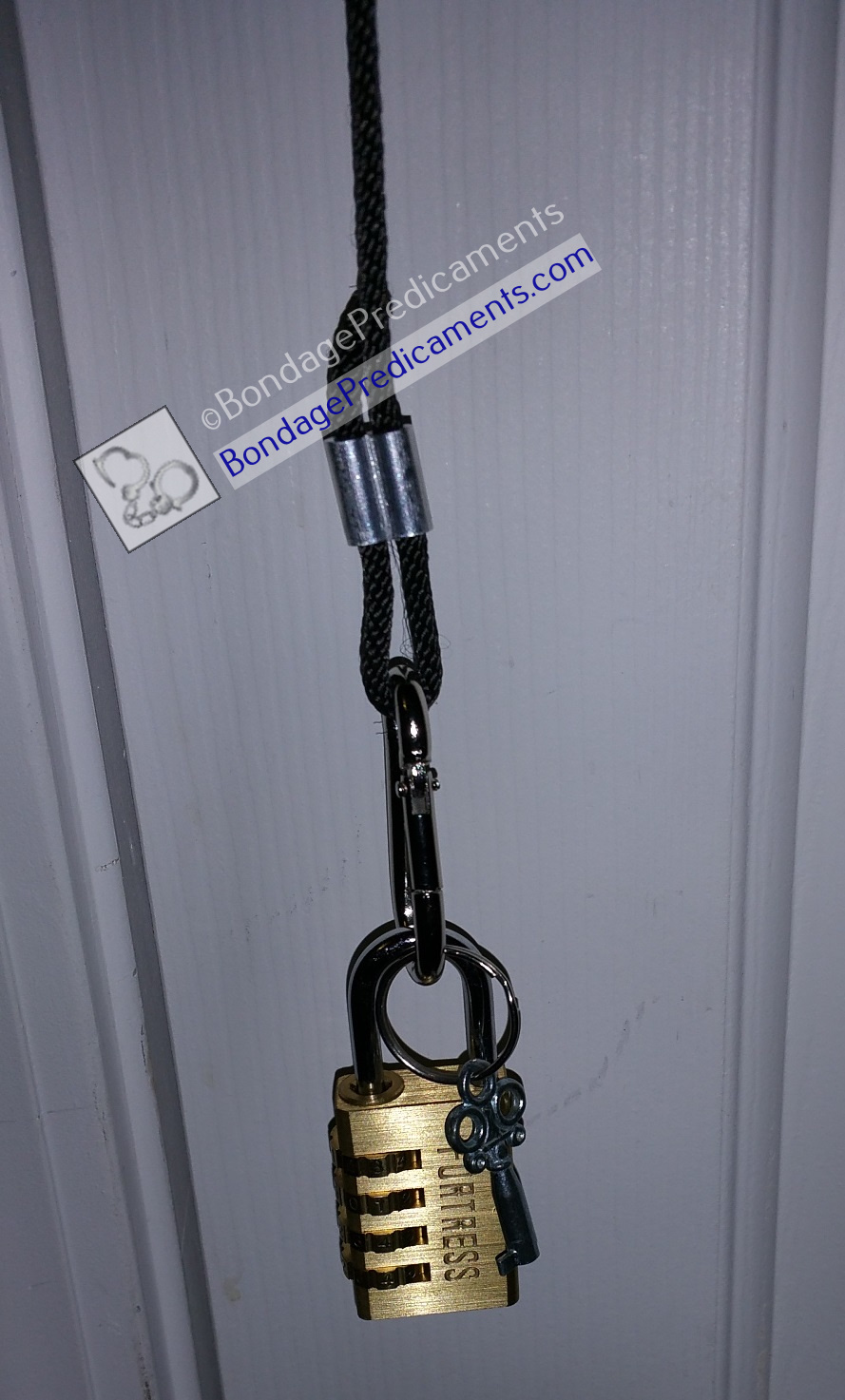 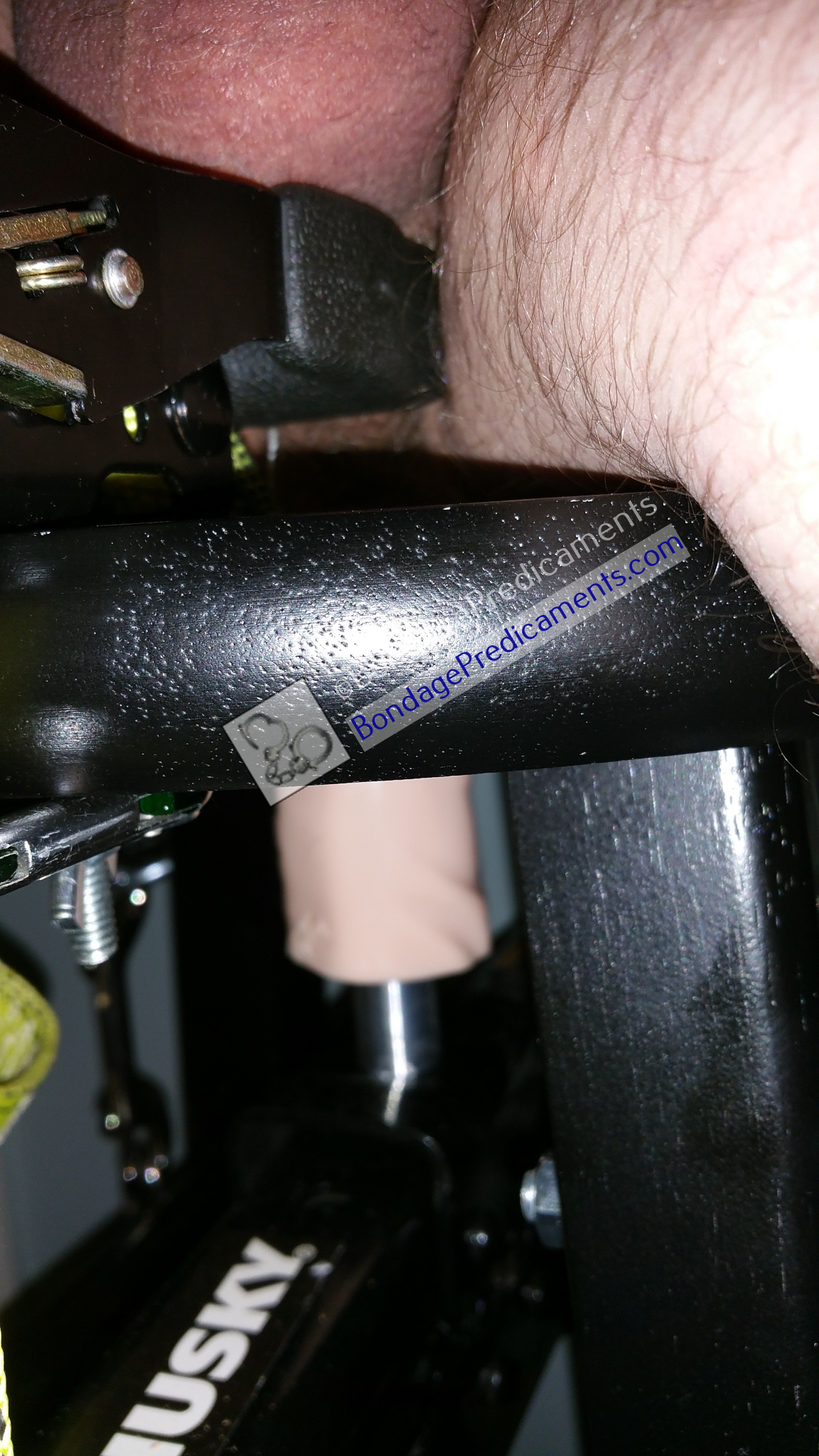 Handcuff his hands behind his back. 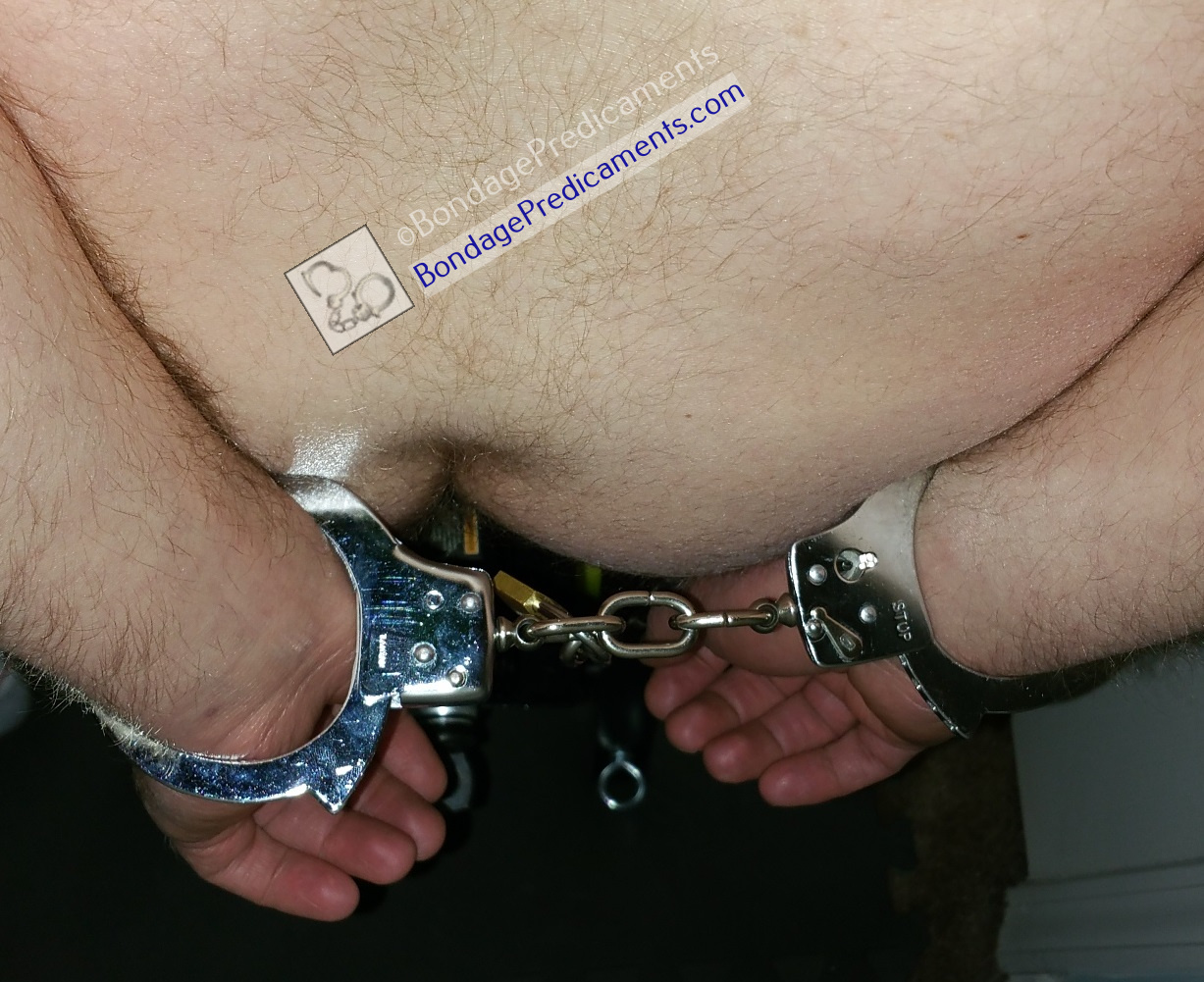 Put a collar on him, then tie a rope from the collar to the handle of the ratchet. Be sure to make it taut, as this is how he's going to be inching his way to freedom. If it's too loose, it won't work. 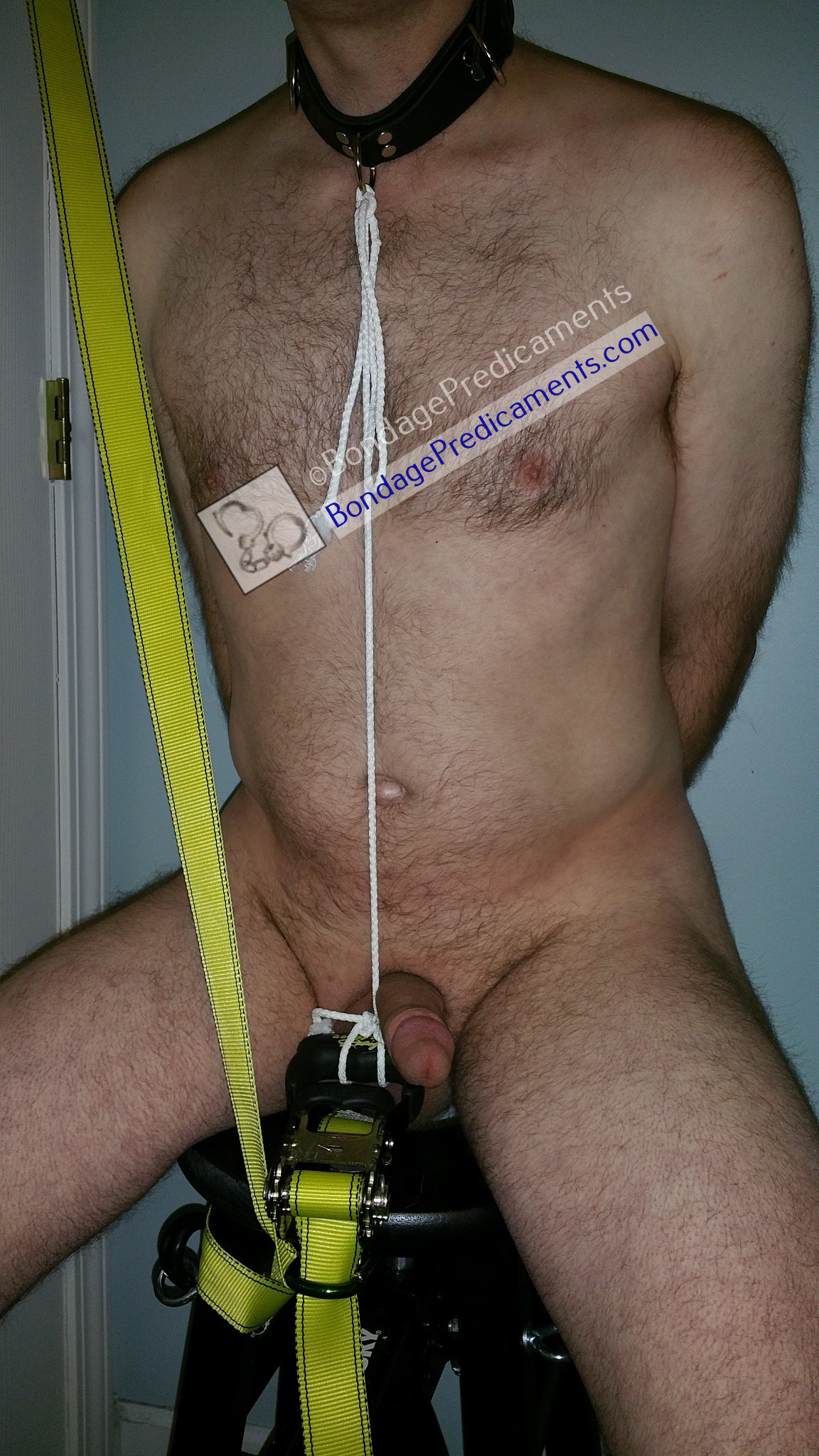 Cuff his feet to the lower eyebolts. You can chain or tie his cuffed hands to an eyebolt in the back of the stool. Just make sure he can still reach the point where the key will eventually fall, so he can free himself (if you're truly doing an escape challenge). 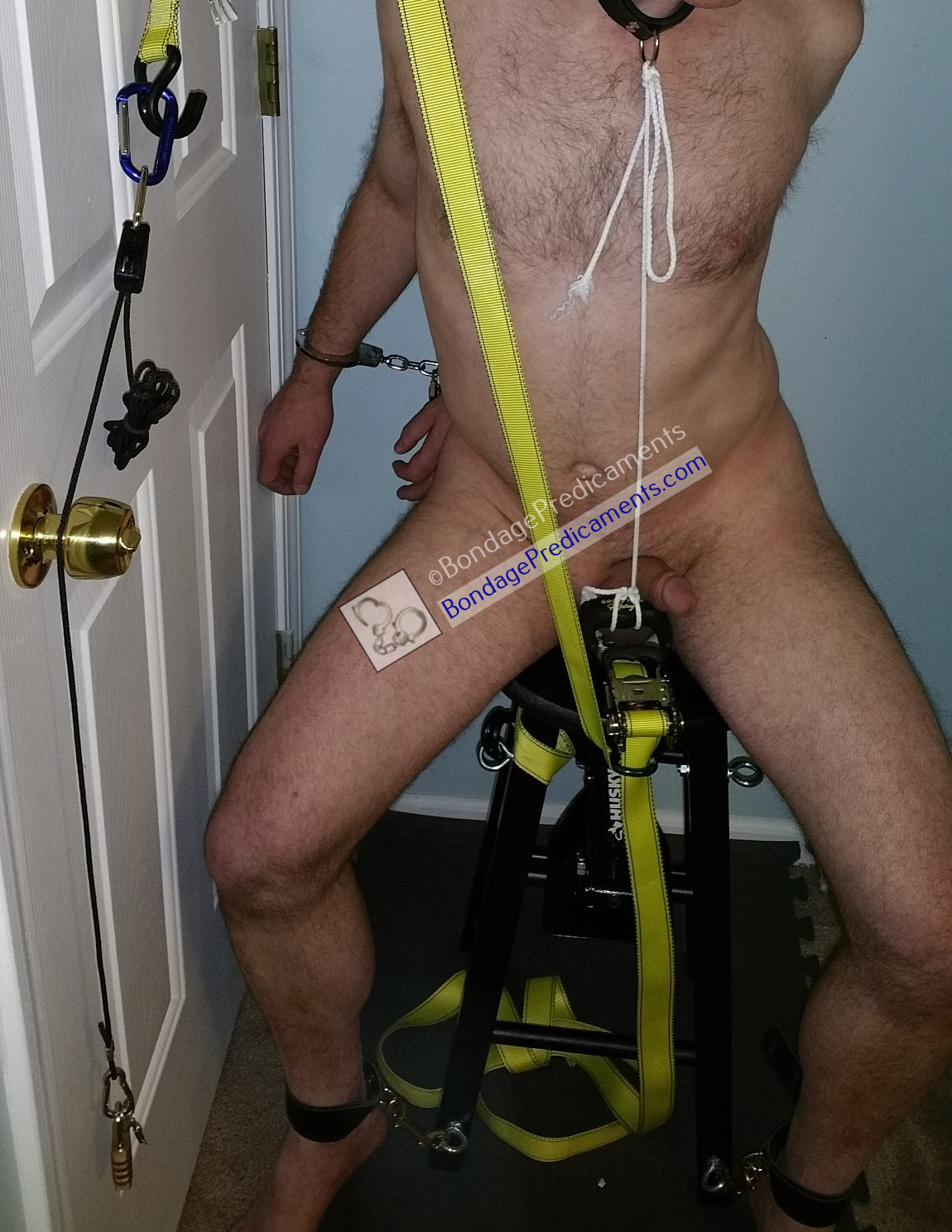 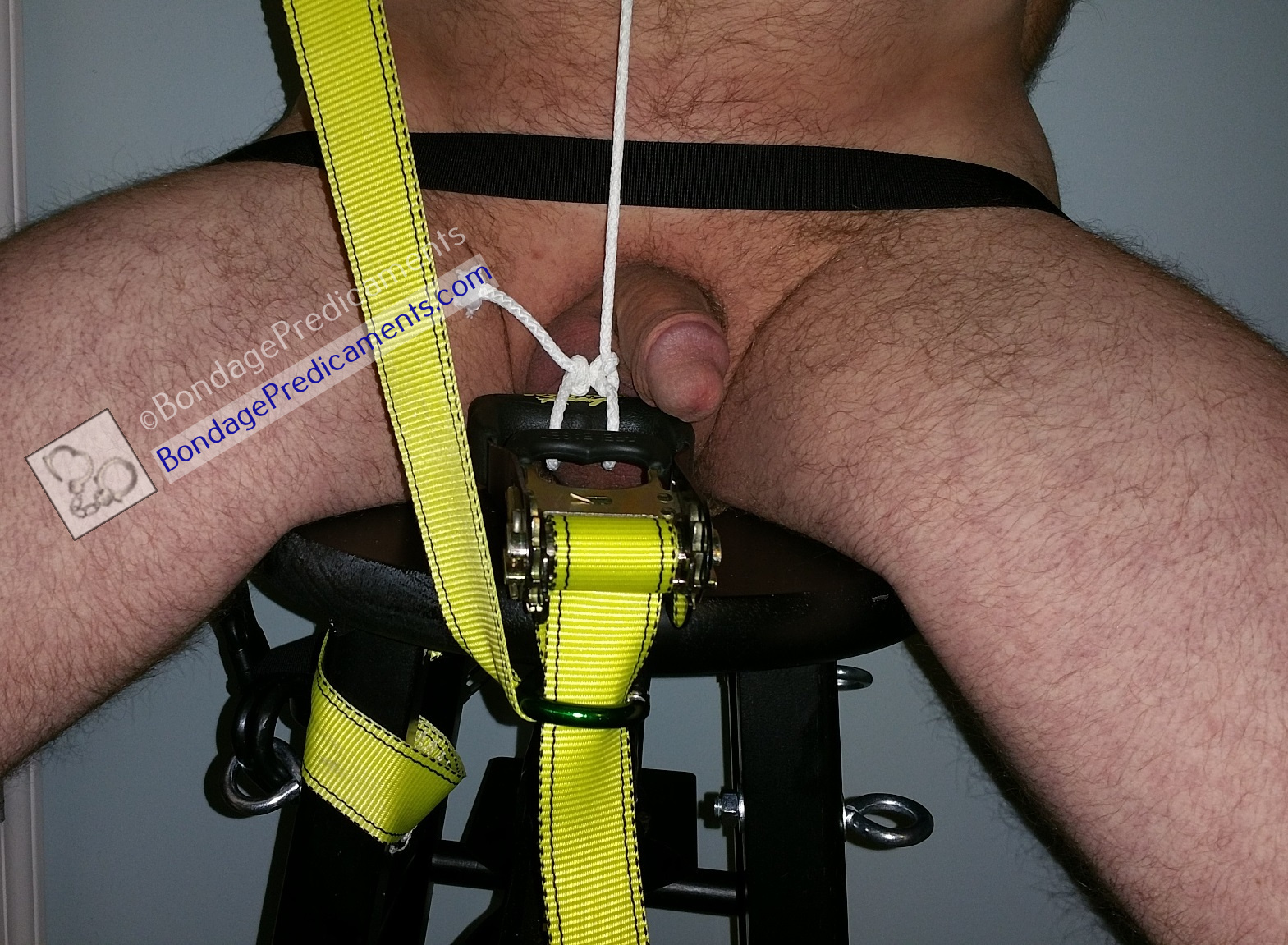 And finally, the key will fall within his reach.

Then he should be able to reach the key... 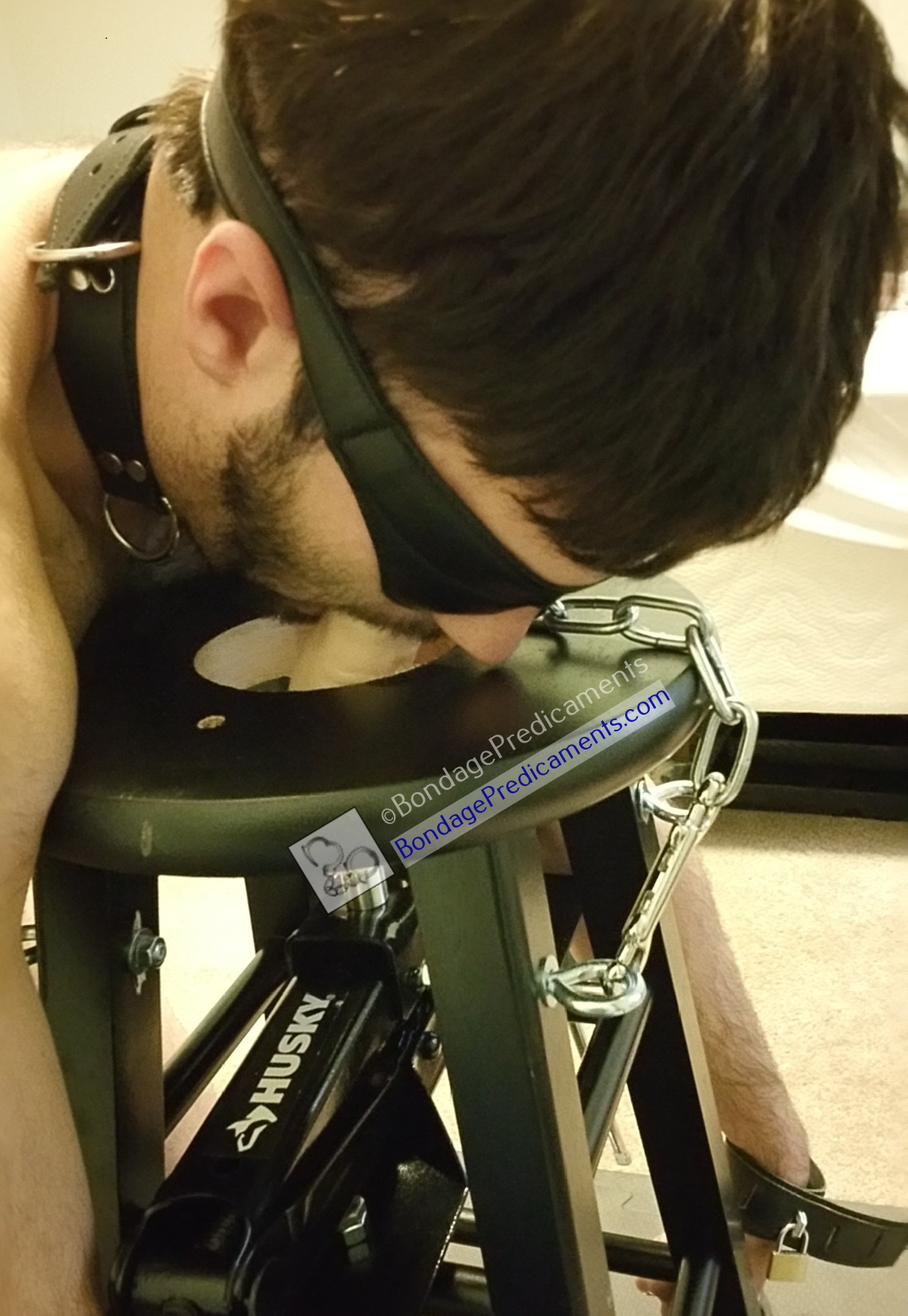 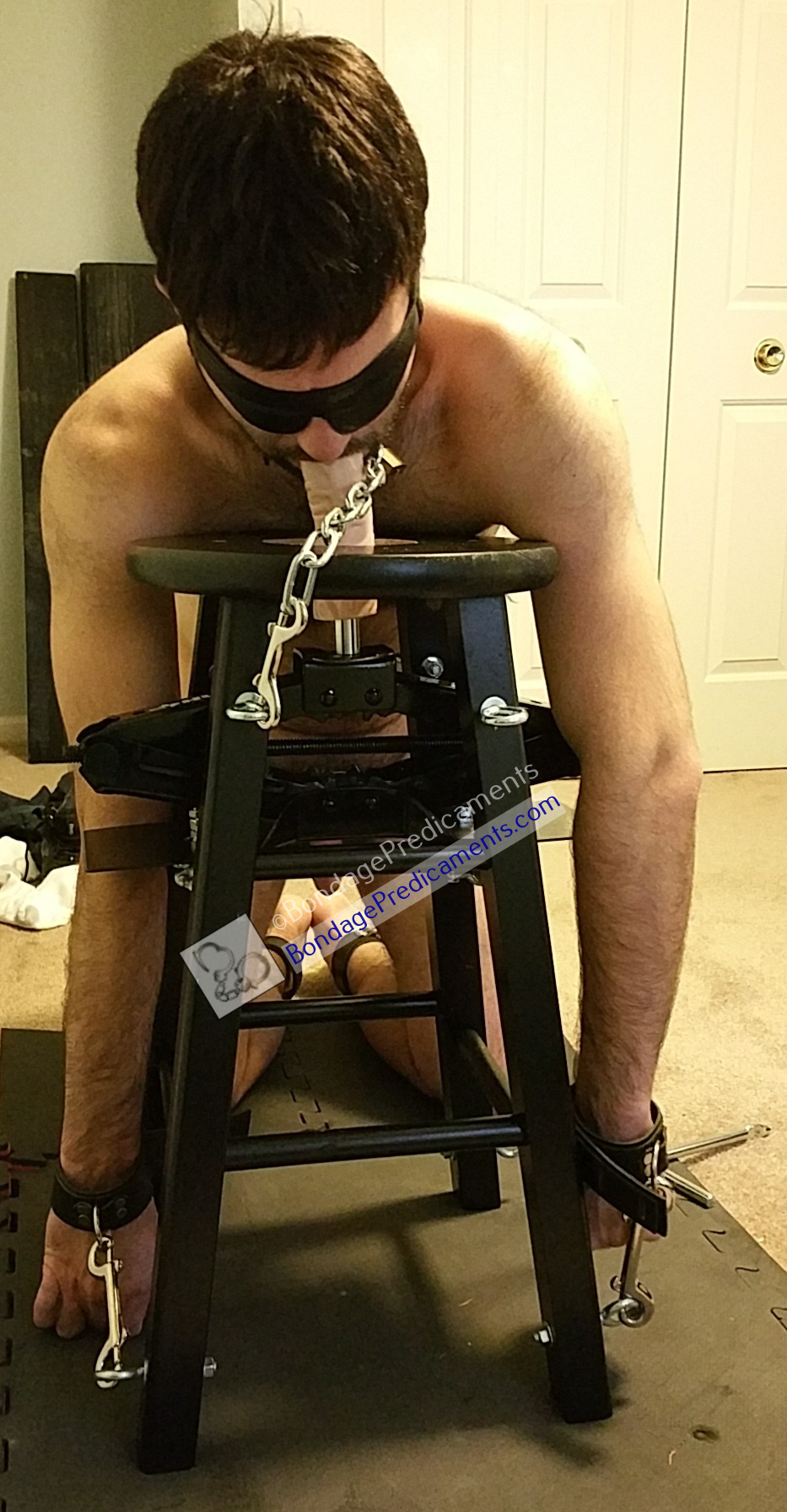 This one is even easier. Just cuff your sub to the bondage stool however you want him. Feet cuffed to the lower eyebolts. Hands cuffed behind. Maybe even add some thumbcuffs, and how about a weight hanging from his balls? 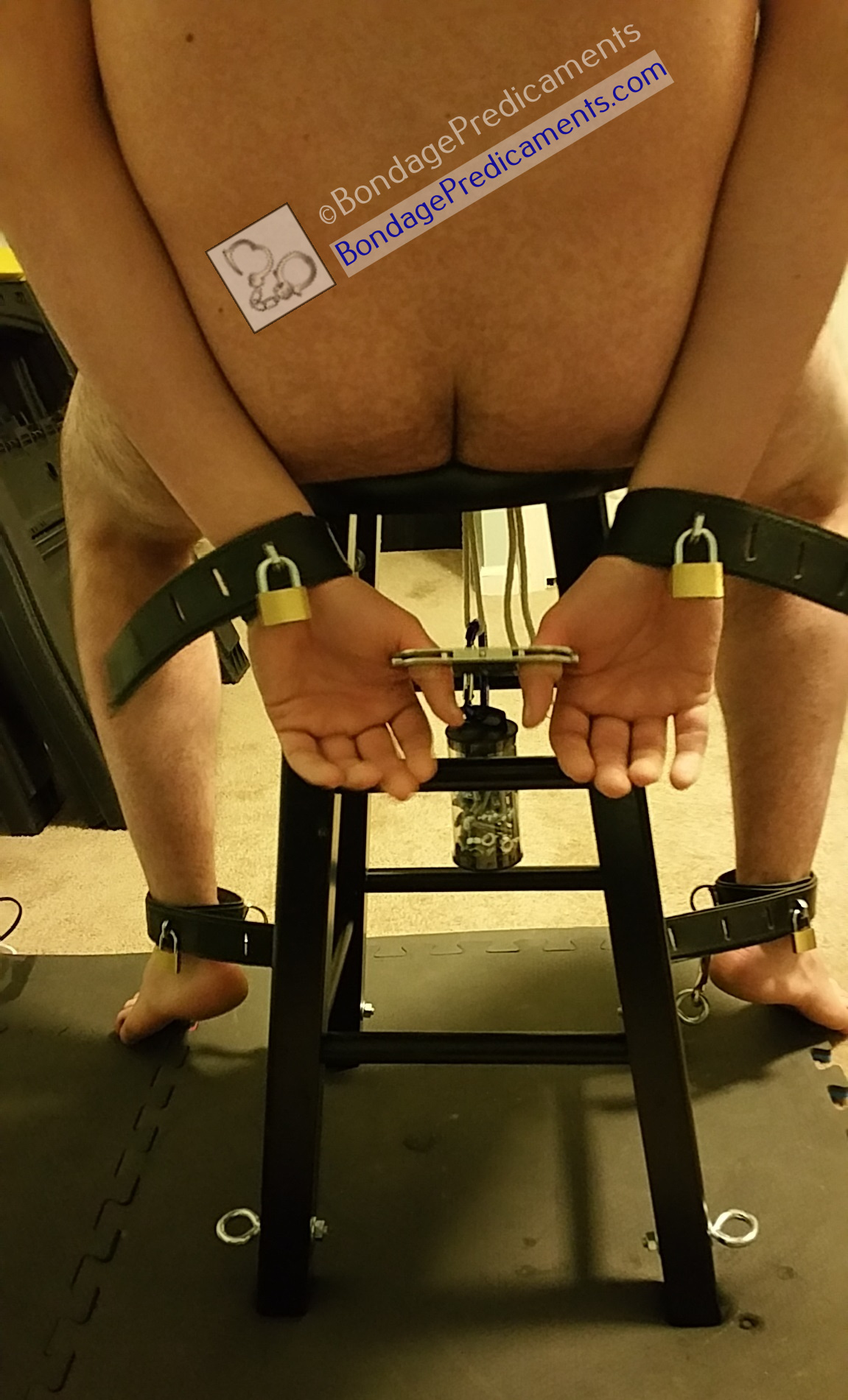 Then clamp an adjustable wand holder to one of the square legs on the bondage stool (if you're using the stool and adjustable wand holder recommended in this series, everything fits perfectly). Now you can angle a vibrating wand however you want...to just tease his cock a bit, maybe vibrating between his cock and balls, or use some rope to make sure he can't pull his dick/balls away from it. 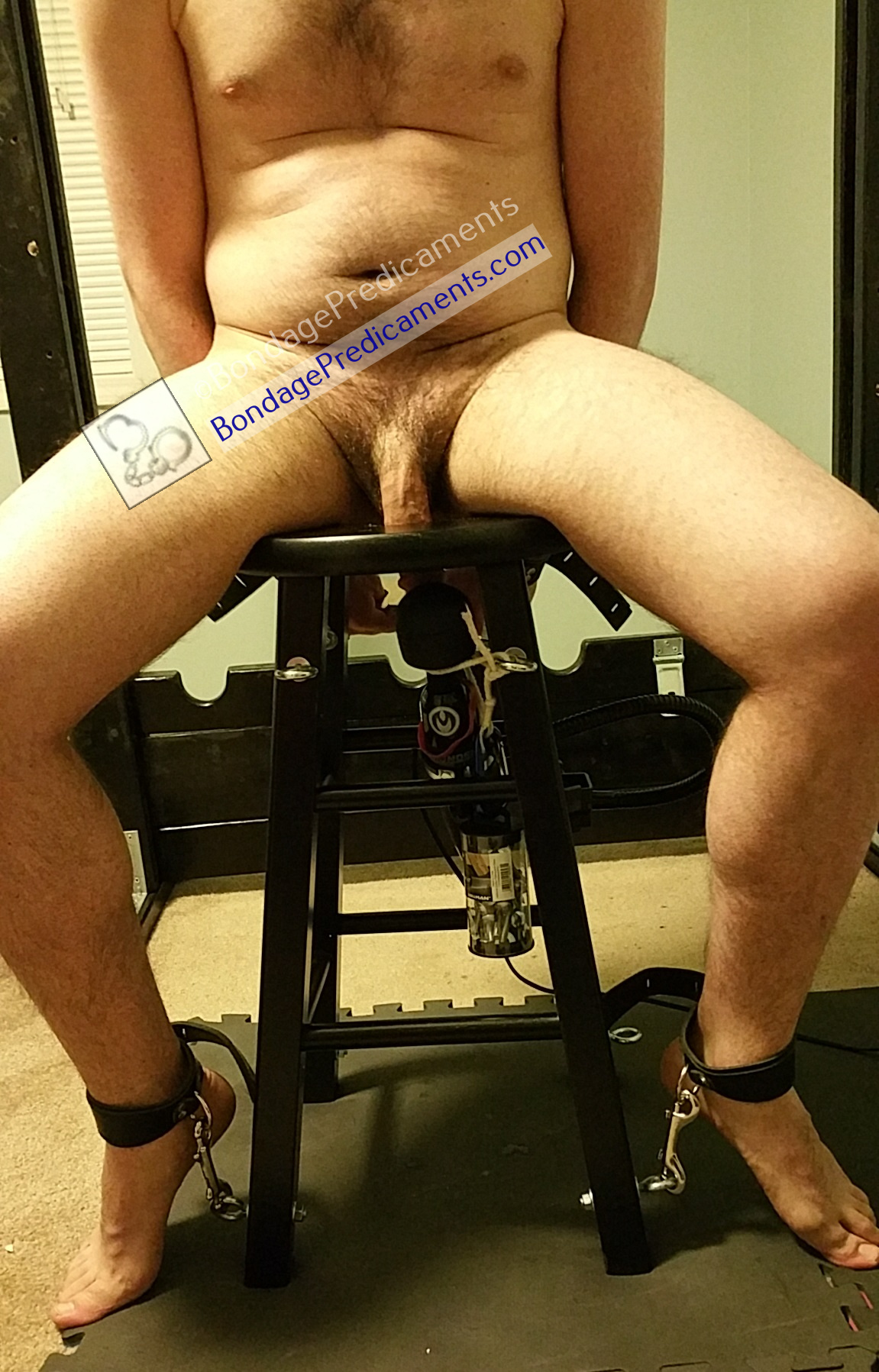 Or maybe go full intensity on the head of his dick. 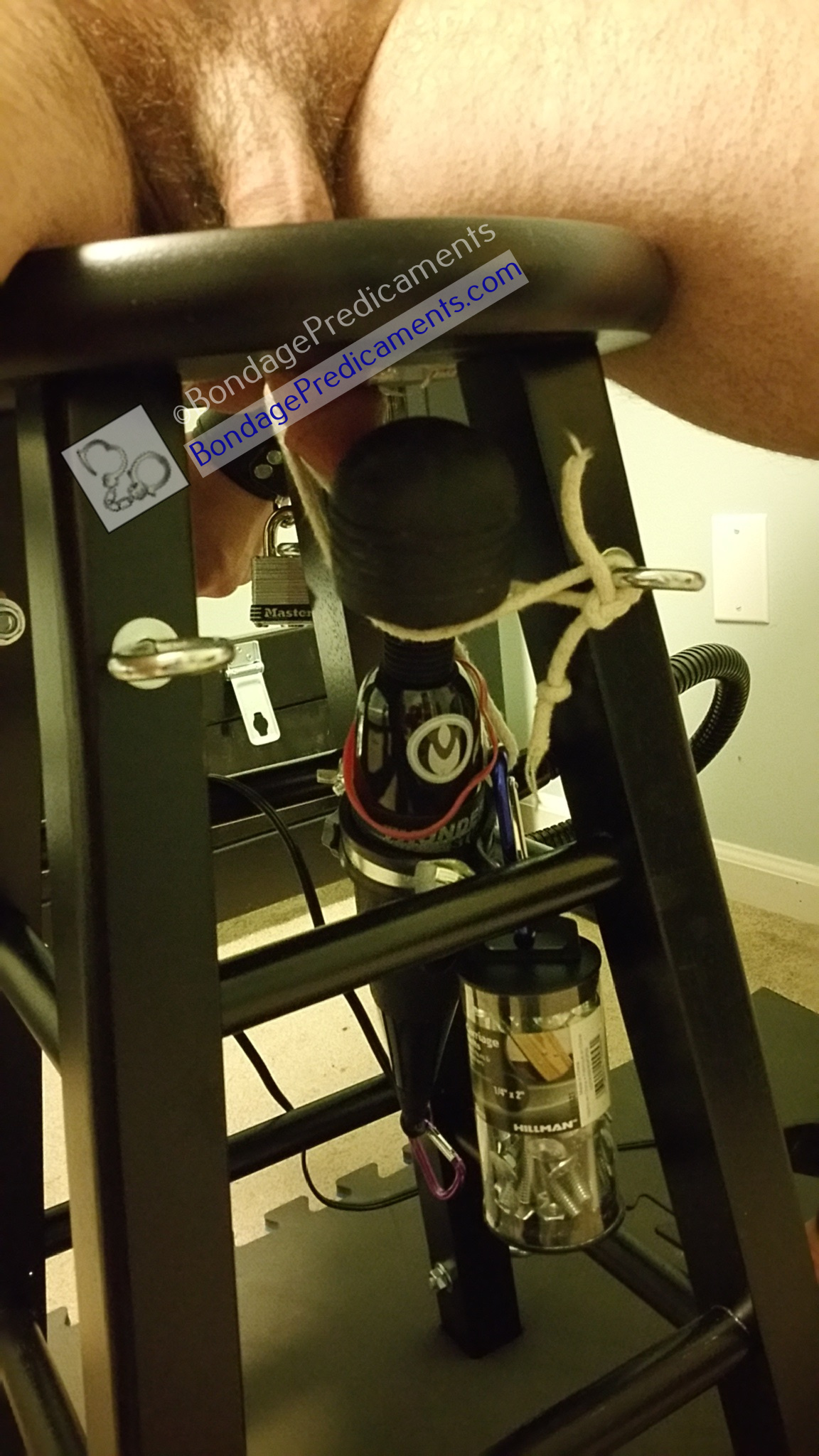 Then watch him squirm and try to pull away.

Next week: ZAP! WHAM! BZZZ! An old comic book, or an e-stim accessories review? On this blog, probably the latter, complete with reviews from Gboy. 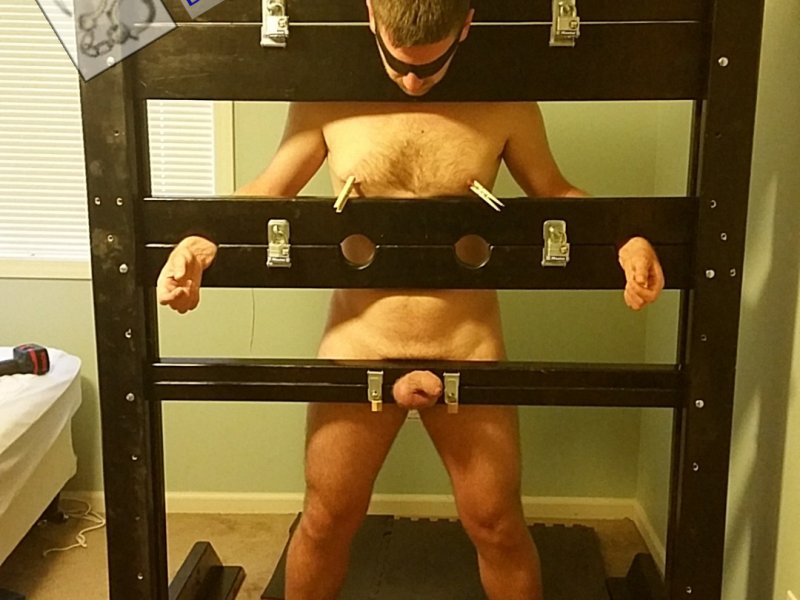 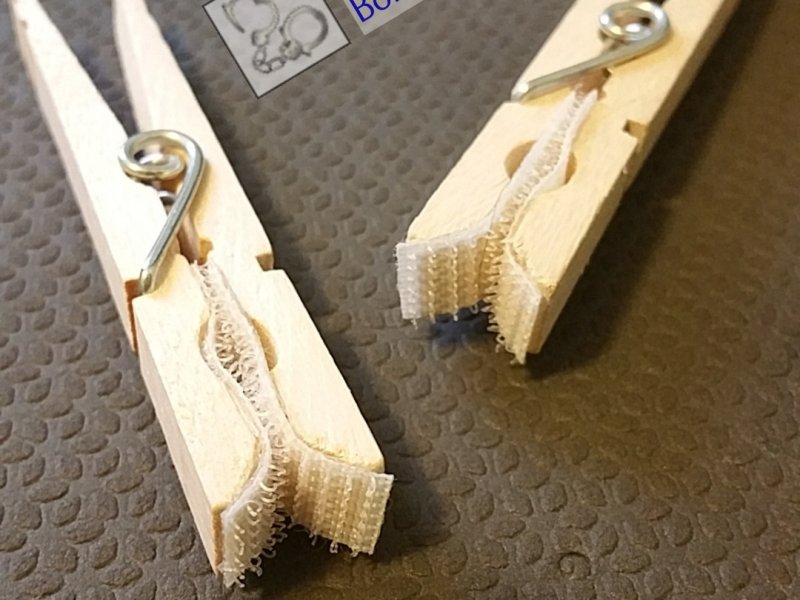 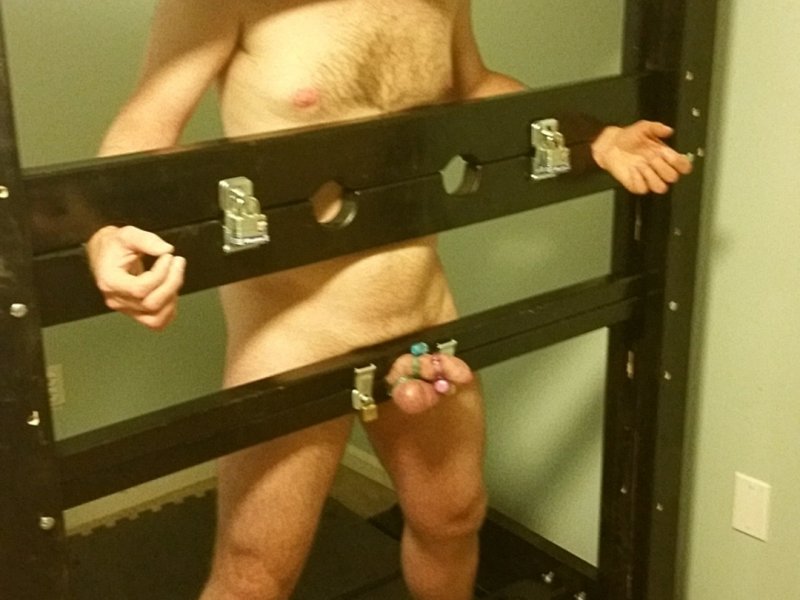 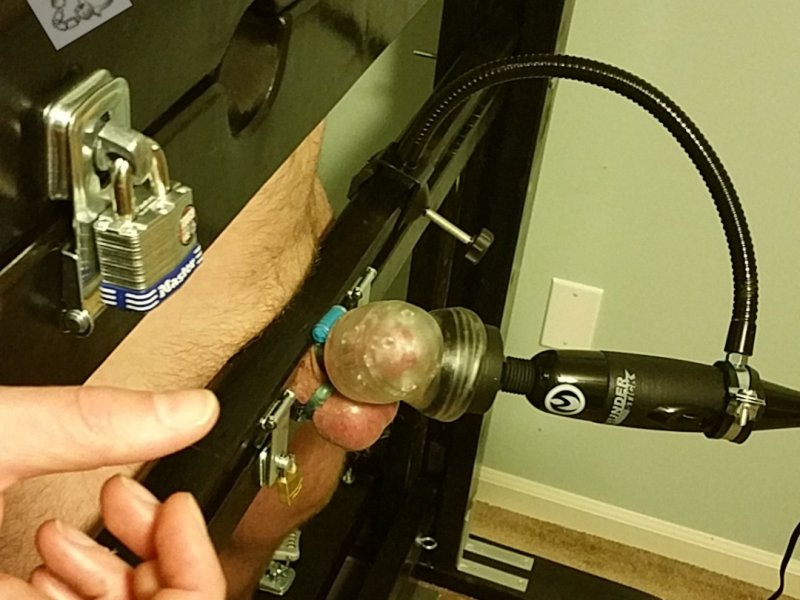 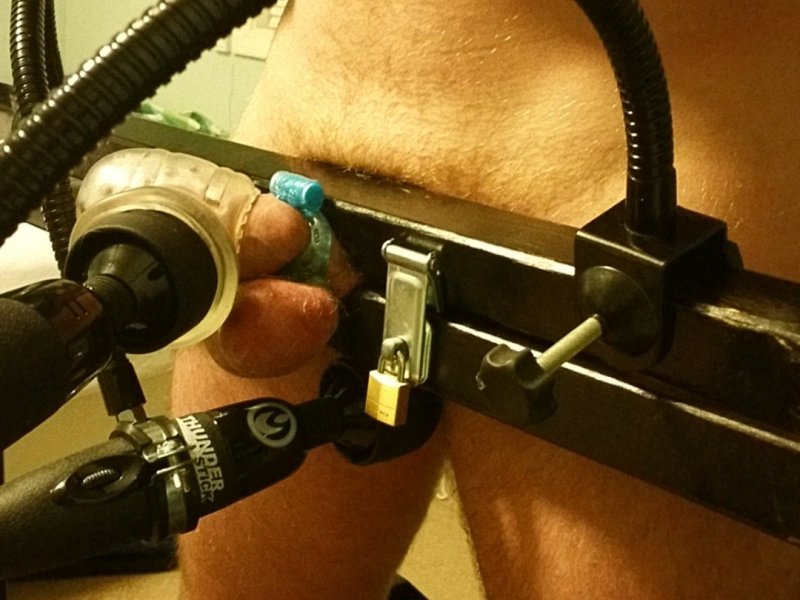