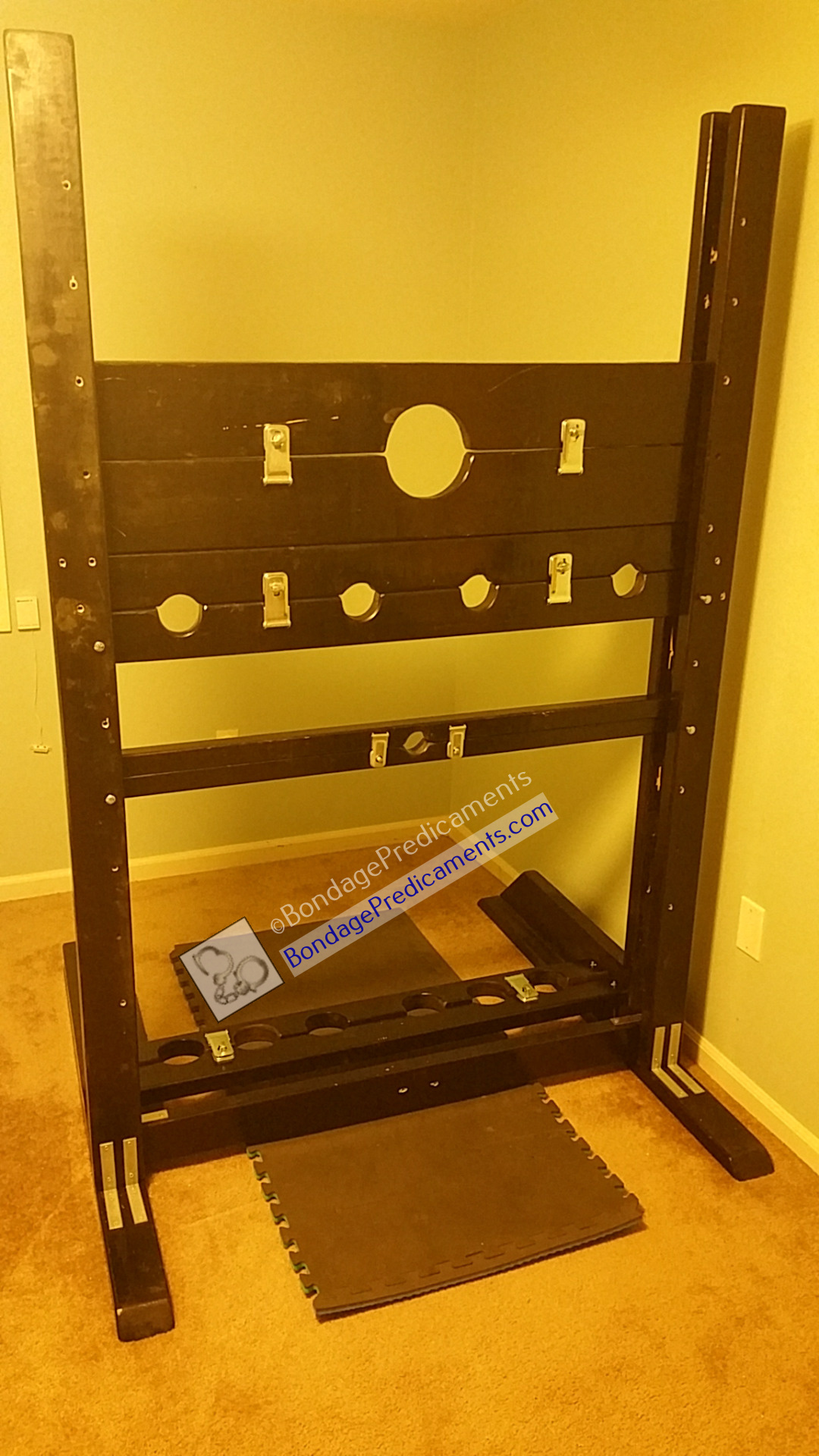 One summer weekend when I was kind of bored, I decided to checkout Craigslist. Sometimes I like to browse through the personals section for comic relief, if for no other reason. It’s amazing how you’ll often see the same guy posting the same ad so many times in one day. But this time, I saw an ad that caught my interest.

“Well-built jock looking for an experienced Dom with a well-equipped playroom who thinks he can tame me. I’ll warn you though, it won’t be an easy task. That being said, I have no limits and I consent to whatever you want to do with me. I’ll bet you still can’t give me the attitude adjustment that I need.”

Part of me was hesitant to respond to the ad since this boy sounded like one of those boys who thinks he wants a guy to do his worst and thinks he’ll be able to handle anything done to him. In reality, these guys are usually either looking for a fantasy cyber jerk off session, or they back out at the last minute.

I decided to respond to the ad, but I was very clear about a few things in my response. I told him he may not have limits, or may not think he has limits, but I do. There are things that I won’t do regardless of whether or not the sub wants them done to him. For starters, I won’t do anything involving blood, permanent marks/damage, or scat. He said he was good with those limits. I added a few more, pretty standard limits for most, but I just wanted to make sure so there were no disappointments. He agreed with everything I listed.

He immediately wanted to make plans for the weekend, but I told him I wanted to talk to him first, and not just behind a computer screen. This is where some guys bail. But he agreed to talk, and he actually sounded pretty normal on the phone. So we made plans to meet that weekend.

Me: “I want you to be here this Saturday night at 7pm.”

Saturday arrived. I hadn’t heard from him in the last few days. I figured it was another online wanker, but I kept the night open to be fair. It was 7:30pm, and still no sign of him, and no call/text to tell me he was running late. I assume he wasn’t going to show, and went about my night.  At 8pm, I heard a knock on the door. I opened the door to see Jim standing there.

Boy: “Yeah, I forgot, then started doing something else, then decided to head over.”

Me: “You should’ve just called or texted me to let me know you were running late, but still coming.”

I was thinking, should I continue with this boy, or send him packing since he was late without even bothering to let me know?

Me: “I’ll still do this, as long as you understand that you’ll be punished for being late, and more severely for not calling to let me know.  I’ll give you a safe word since this is your first time.  But since you’re so damn cocky about being able to handle anything I’ve got, if you use the safe word, as long as your health isn’t in jeopardy of course, I’ll be locking your dick in chastity and it will remain locked for at least a week.”

Boy (said with a bit of an attitude):  “Yeah ok, whatever.  Let’s do this.  Let’s see how much ‘punishment’ you can dish out.”  (he said punishment using air quotes)  “And don’t worry about me using a safe word.  Trust me dude, you can’t even make me use a safe word.”

Now I was really starting to see this boy’s attitude, and I could certainly understand why he told me he needed an attitude adjustment. This was going to be fun.  ;-)

I smirked, thinking about how much fun adjusting this boy’s attitude was going to be, as I pulled his shirt off of him, then immediately grabbed his hands and held them police-style behind his back. I grabbed the pair of hinged handcuffs hanging from my pocket and cuffed his hands behind his back with his palms facing out. I blindfolded him, then escorted him to the playroom.

We walked into the playroom. I told Jim that if he wanted to do this, he had 1 minute to take the rest of his clothes off, and that the handcuffs were not coming off first. He looked at me and hesitated for about 3 seconds, as if I just gave him an impossible task. He thought I was joking. I wasn’t. He could see in my eyes that I was serious, and he quickly sprang into action, struggling to get his shoes off, then his socks, then his shorts, then his boxers, all while his hands were cuffed behind his back with the hinged handcuffs severely limiting his movement ability. With that, I could see that this boy really wanted this to happen. And judging by something else that sprang into action, I could tell that he had been looking forward to this all week.

First, this boy is going to serve his punishment for being an hour late without even calling me to let me know. I looked around the room thinking about what I should do with him first. An hour locked in the stocks? 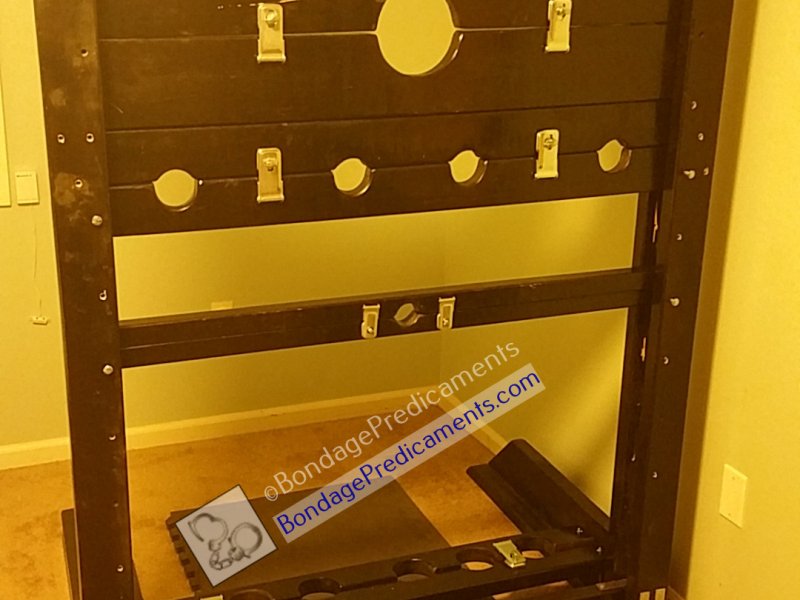 Maybe facing up to make it tougher and get that attitude out of this boy up front. 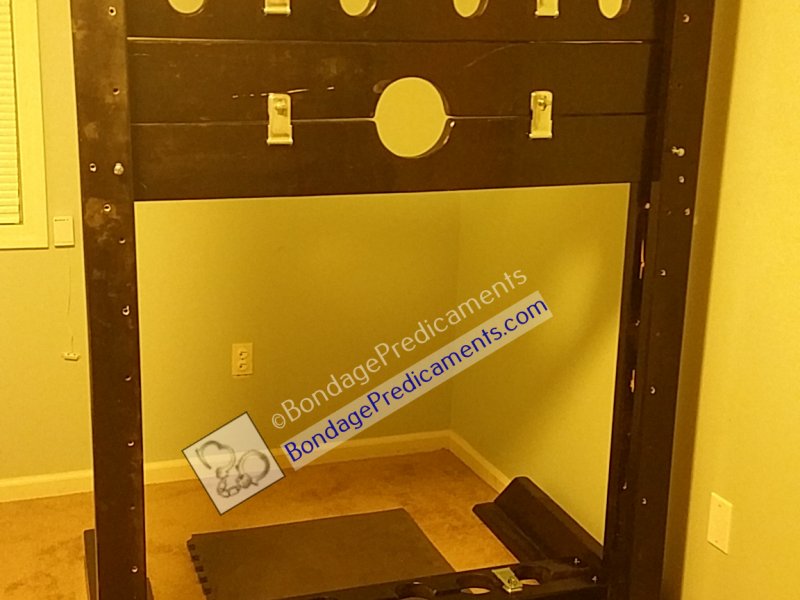 Or, stretch him out on the rack and give the winch an extra crank every 5-10 minutes. 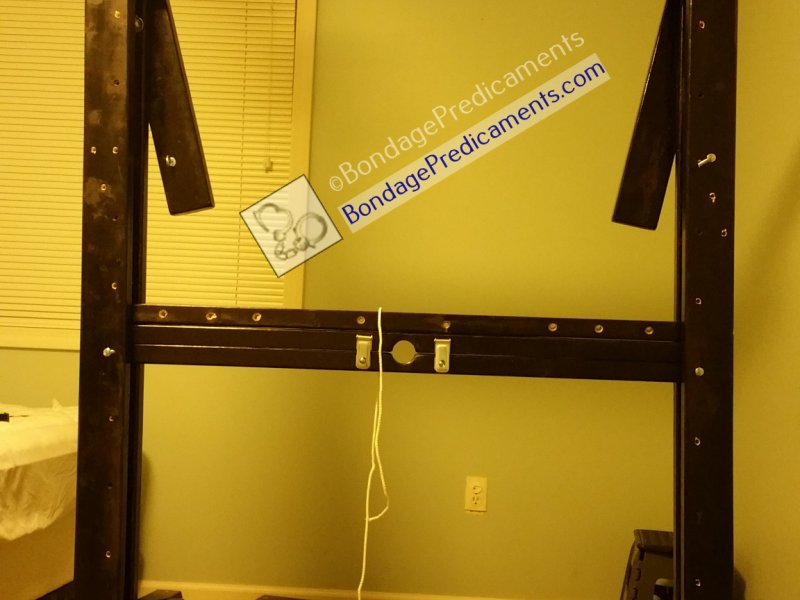 Or maybe I should cuff him to the bondage wall while straddling the wooden horse, making sure he’s forced up on his toes to avoid sitting on the edge of the horse. 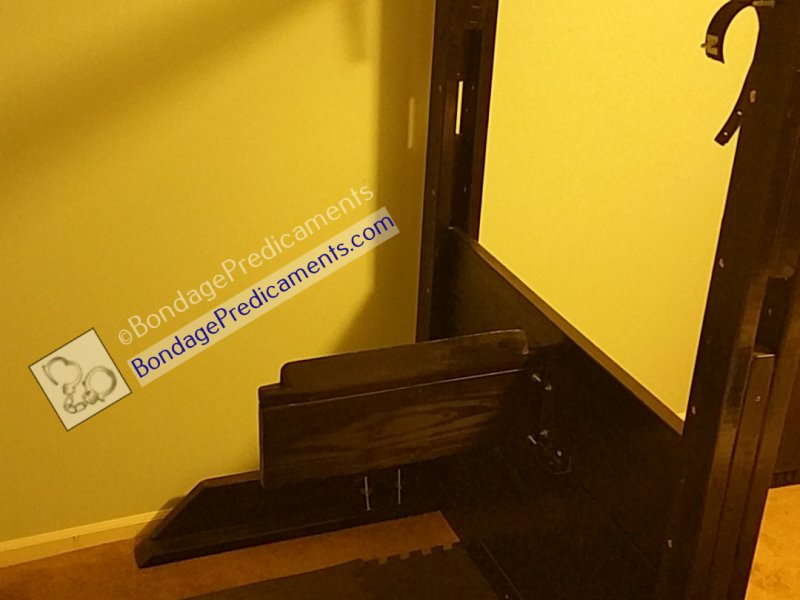 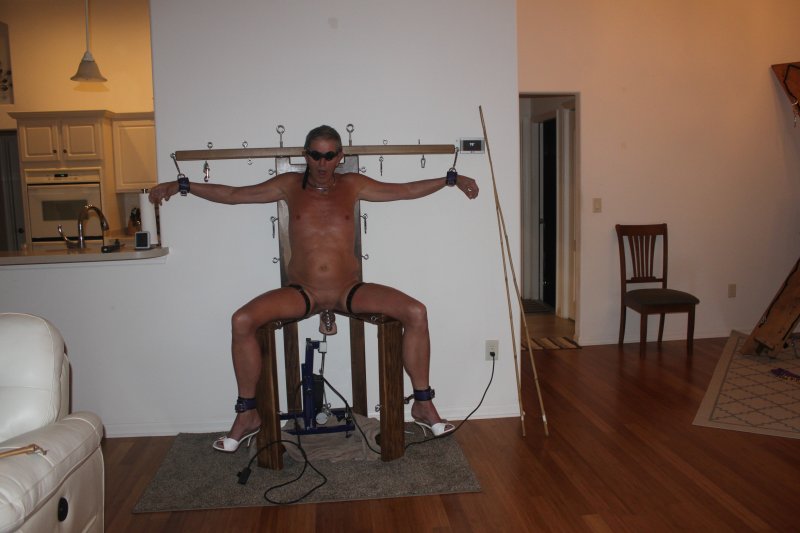 This sounds like the beginning of an interesting story. 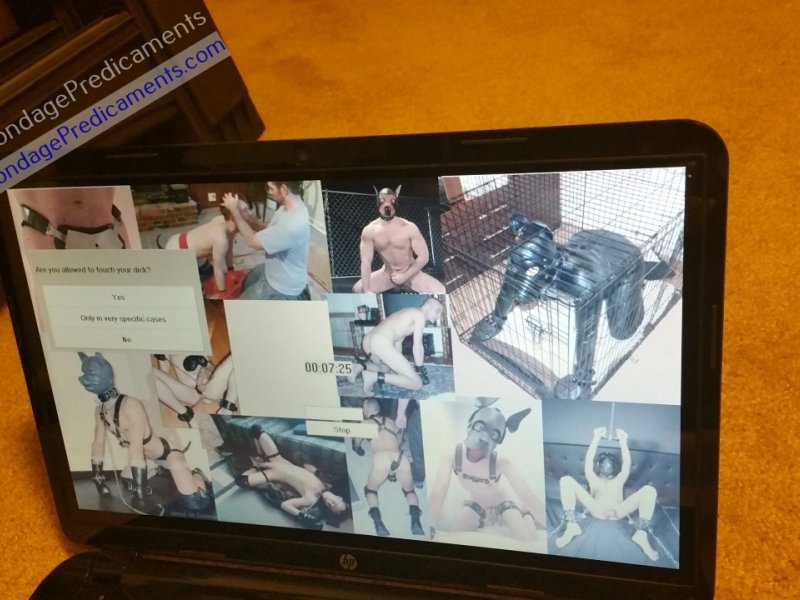 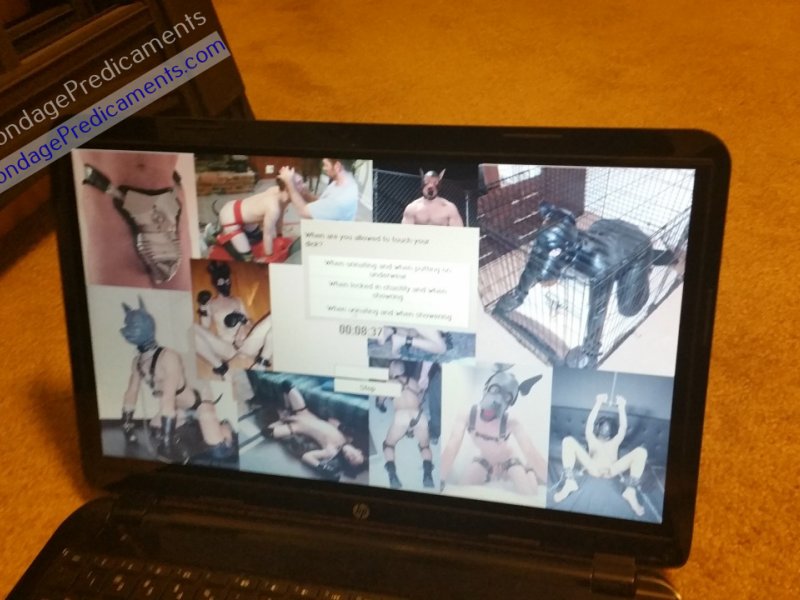 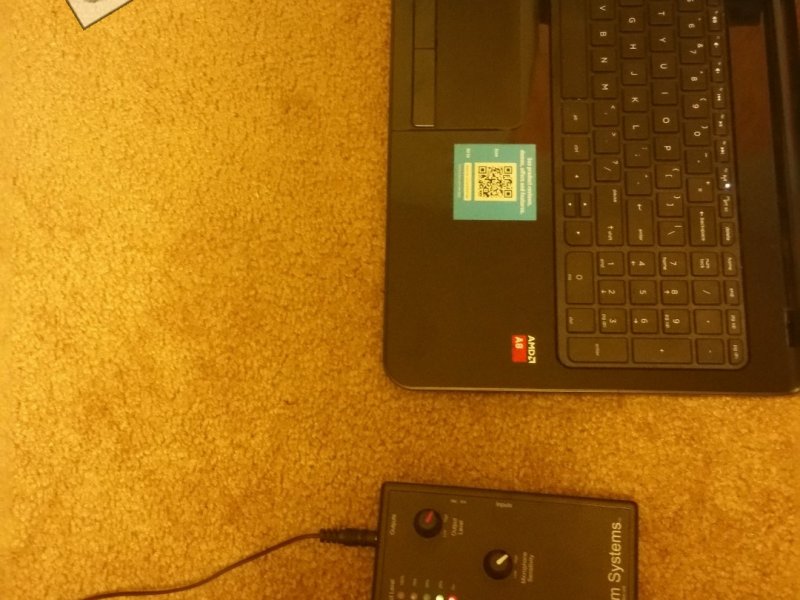 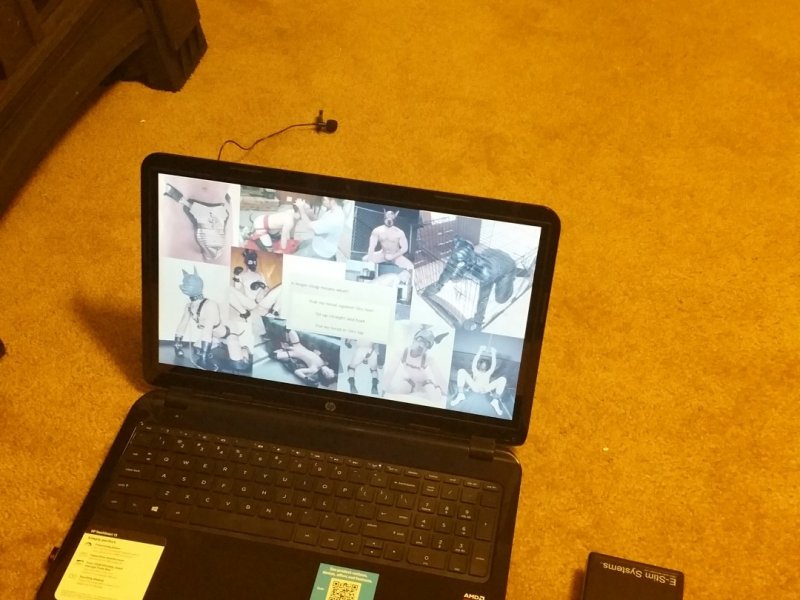