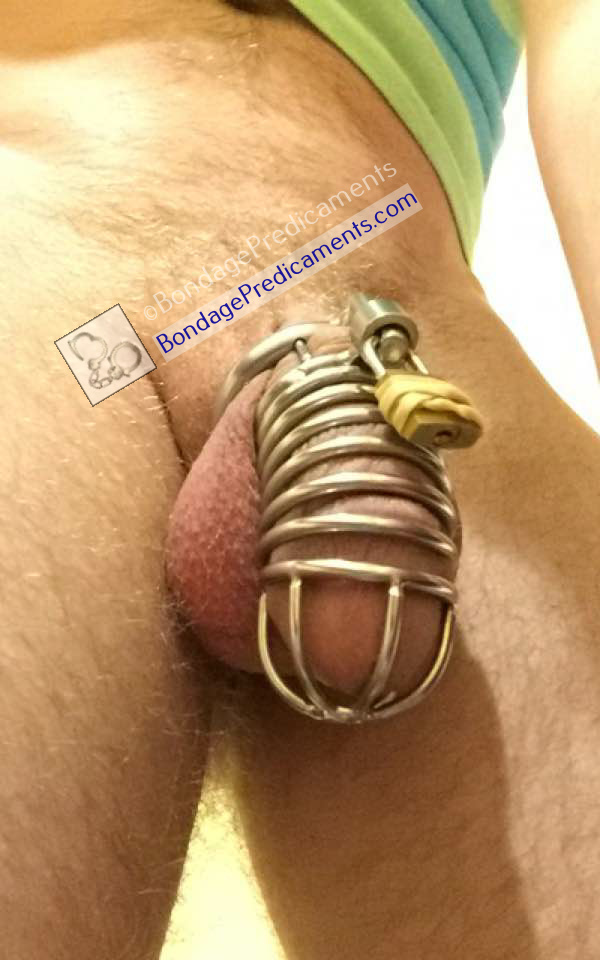 The next morning I woke up before my alarm to find my hand wrapped around the unyielding steel of my chastity cage and a frustrating groan already forming in the back of my throat. Ugh! Two days without cumming was longer than I’d gone since… well, since I started. I tried licking my thumb and slipping it through the top of the cage, just enough to rub the exposed head of my dick. It felt good and I squirmed, still under the blankets but after a few minutes, all I had done was make myself even hornier and harder and – AARGH! Frustrated, I threw my covers off and got ready to meet Brian, triple checking to make sure I had his freshly washed clothes on the top of my bag.

Training that morning was intense and I could tell Brian had just as much pent up energy as I did. I don’t think I’d ever run that fast or worked that hard which, I guess was exactly what Coach had been hoping for. Brian had been pretty gruff all morning, not saying much other than, “one more”, “keep up”, “get moving” and as we called it a morning and hit the showers I realised his frustration at being locked was turning to resentment – towards me.

“Better be the last time you get me locked in this boy.” I mumbled a disheartened,

“Yes Captain.” Just as I had finished stripping down, Brian had pushed his jock strap down around his ankles and stepped out of it, leaving it on the floor. I looked up at Brian to see a smirk in his eye and without words I knelt on all fours and took his sweaty jock in my mouth. The taste of it was delicious, I loved his scent and after an hour of hard exercise, it was quite a musk! Without thinking I let out a hungry moan and instantly froze, flushing a deep embarrassed red. I didn’t look up but heard Brian chuckle,

“You really like that boy? You like the smell of my sweat?” I nodded slowly, ashamed but increasingly obedient in Brian’s dominating presence. “Then put it away and maybe you can have some more.” I crawled to place his jock in my bag and returned, to kneel in front of Brian. I didn’t really know what he wanted but I knew I liked being there, and I wanted to please him, I wanted him to like me, wanted to be good for him.

“Why don’t you start with my feet boy?” and I did. Leaning down, I hesitantly sniffed the top of his foot, then kissed it gently, before reaching out my tongue to lightly flick the very fine hair along the ridge of his foot. Slowly I grew in confidence (and horniness) and soon found myself hungrily licking Brian’s feet, my tongue finding the crevices between his toes, running along the sides. I can’t explain why but where my head shouted that there should have been humiliation and shame, all I felt was desire and, oddly, pride.

“Good boy, little one. Come up here.” I looked up to see Brian standing above me, gloriously toned and with one arm raised above his head, exposing the dark hair of his underarm. I should have been disgusted I know and maybe it was two days of pent up cum coupled with a new-found fetish for sweaty jock’s feet but all I know is that I wanted more. I stood, a little shakily after having knelt on the hard tiles and my tongue found its way to Brian’s armpit. His scent was stronger here and I found myself lost in it. When he at last pushed me away, I stood panting, biting my lip, my face half covered in a mix of sweat and saliva. I couldn’t help but look down at Brian’s dick, which was straining in his cage. Apparently I wasn’t the only one who liked my submission. Brian reached down to touch his cage and grunted in frustration before stalking away to the showers.

I tried all day to focus at Uni but couldn’t keep my mind off the tongue bath I’d given Brian. At home, I lay in bed and tried desperately to get myself off. I held the pillow between my legs, humping it. I fingered my hole, sliding a finger inside my ass to massage my prostate. And in the end, I punched the pillow a half dozen times and collapsed onto the bed. Tossing and turning I wondered what tomorrow’s training session would bring.

What it brought was Brian, as hot as always… and four others from the team, all at the top of the class, fit, toned, and sexy as fuck.

“Figured we could drill a little better with some support this morning.” Which apparently meant being repeatedly embarrassed dropping the ball, falling over during a tackle and being soundly beaten in every exercise we did. Add to that my time with Brian was now being interrupted by four unwanted teammates. Needless to say, I wasn’t overly cheery when we headed for the change rooms. The other five were laughing and joking while getting undressed while I quietly stripped and headed to the shower. I was half way across the room when Brian cleared his throat. I turned to find five pairs of eyes fixed on me but mine went straight to Brian. Standing, holding his jock in one hand outstretched towards me. With a lazy underarm toss, Brian threw the towel onto the floor half way between us. It sat there, in an deafening silence.

As if time had slowed to a crawl, I tore my eyes from the jock and looked up at Brian who stared back stoically, an eyebrow raised in question, his entire face calm and in control. I could feel the others smirking but Brian held my gaze till my eyes dropped to the floor, followed by my head which slumped in shame, my shoulders which drooped in resignation, and at last, slowly, my knees which knelt in submission. I crawled over to Brian’s underwear, took them in my mouth and padded over to my bag. As I turned around, Brian said,

“You know boy, I’ve thought about unlocking that cage of yours. After all, Coach did give me the key. But then again, where does that get me? I’m still locked. I can’t get out till next week and why should I suffer alone. In fact, why should I suffer the same as you? It just doesn’t seem fair does it boy?”

I bit my lip, nervous and confused as he continued, “but if I can’t get out of this cage, then for you to suffer any more than me, we’ll just have to find some way of making you even hornier.” I gulped, not sure what he had in mind but my head and my dick were at war as to whether I should be terrified or delighted. 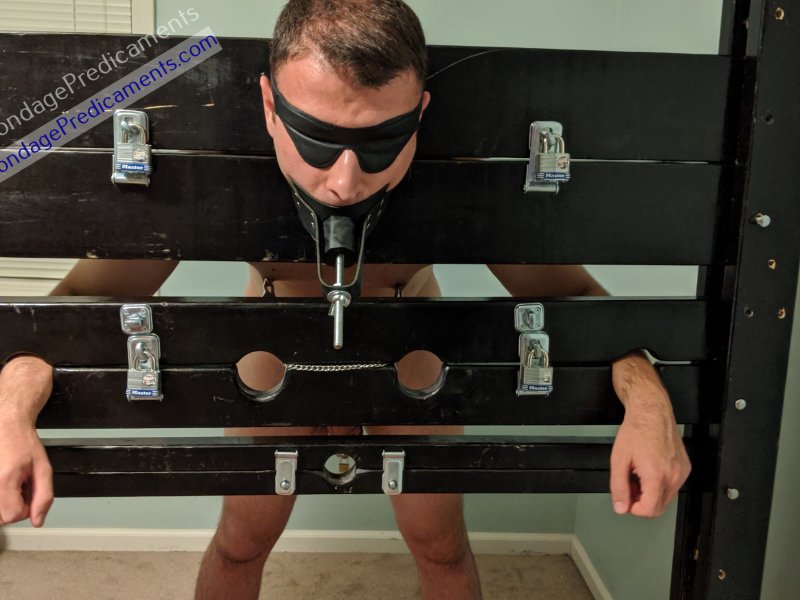 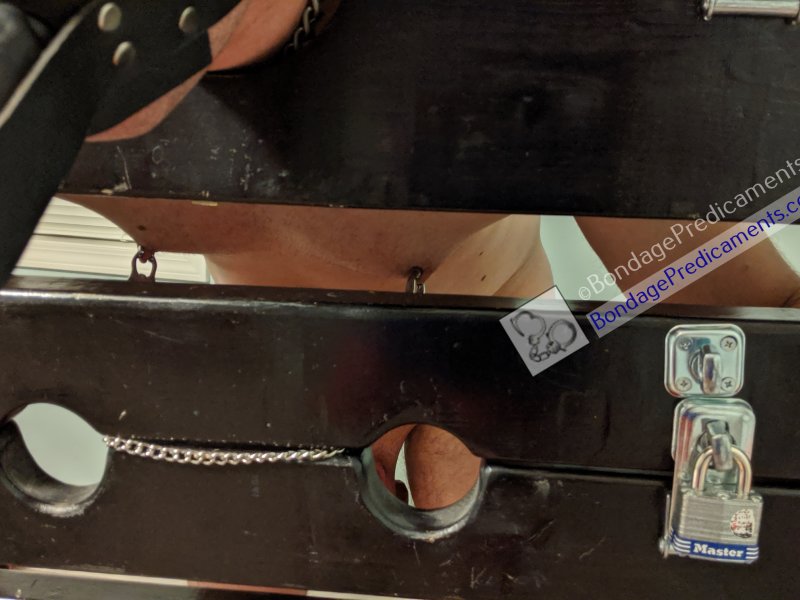 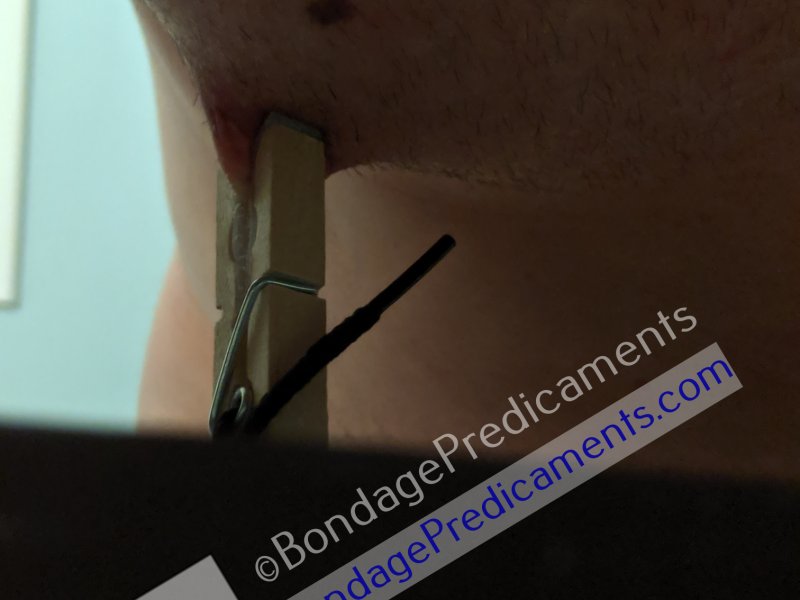 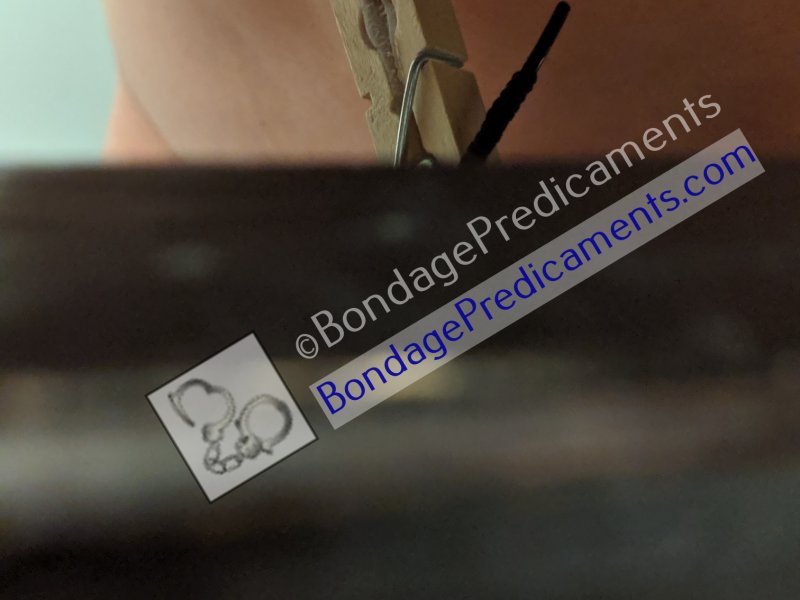 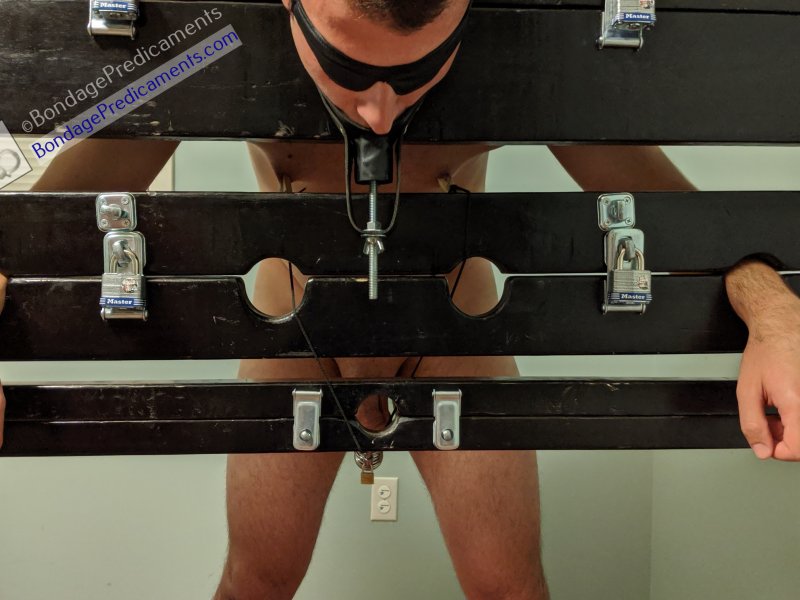