I found myself naked and on all fours, looking up like a lost puppy at Brian, with five fit, toned jocks standing around me, two wearing their underwear, one with a towel wrapped around his waist, one unashamedly naked – and why would he be with a package like that – and Brian caged like me, staring down with a smirk on his face. Brian reached down and twisted his fingers through the hair on the back of my head, firmly twisting my head till my face was a scant inch from the damp fabric of my teammate’s briefs. I couldn’t help myself, it was almost instinctive, but I stretched forward slightly, enjoying the sharp pull on my hair as Brian held his grip and breathed in deeply, savouring the deep scent. In the periphery, I could hear a mumble and chuckle from my teammates but whether it was derision, disgust or lust I couldn’t say; I found myself intoxicated by the smell filling my senses. God I’d never been so horny or hungry! Brian’s voice cut through the fog,

“Since you obviously crave it boy, why don’t you help your teammates relax after their workout.” Brian’s hand on my head pushed me forward so I could feel the dampness on my face as I pressed against the jock’s crotch. I whimpered and set to licking and lightly bighting my way around the jock’s briefs unaware that my frantically taking deep breaths while trying to simultaneously exploring with my tongue drove the appearance of a puppy even further. The jock let me play for a few minutes, before slipping the briefs down to rest under his balls, exposing a thick, throbbing dick that slapped my face. The jock’s foreskin covered the tip of his erect head and I wasted no time in working my tongue underneath to taste him. There’s something unique about that taste that had always driven me wild. Clean though certainly not fresh, with the last hint of the jock’s morning piss mingled with sweat and my tongue loving every bit of it. I worked his foreskin down, exposing his head, and wrapping my lips tightly around the tip before inching down, my tongue rolling around his head inside my mouth. That didn’t last long as the jock took my head in both hands, held me immobile and impossibly slowly and unavoidably inexorably thrust his cock deeper into my mouth. I could feel his throbbing head, reaching the back of my throat with my nose a little over an inch from his flat stomach. He didn’t stop. My eyes widened as his dick opened my throat and slid the rest of the way inside of me. He held my head still and I couldn’t have said whether it was for a second or a minute that my nose was pressed into the black tuft of hair and my entire focus was on suppressing my gag reflex. I failed and let out a strangled cough but he did not relent and held me for a few seconds more before releasing me enough to draw breath.

“One down boy.” I don’t know whether I was horrified or thrust deep into rapture at servicing the rest of my teammates but I wasn’t given the choice. Brian twisted me around to the next dick and the next, and the next. For each of them, I worshipped, I gagged, I slobbered, I licked, I sucked, I savoured, I devoured and was fed their seed. When at last I was allowed to sag, panting on the floor I noticed that beneath my cage was a small pool of pre-cum. If Brian’s goal had been to make me horny, he had without question kicked a six!

“Ready for your shower boy?” I nodded, not understanding until I felt a warm stream hit my shoulder and run down my back. One by one, the jocks around me began to piss on me: on my back, chest, tummy, shoulders and neck. The smell was immediate and strong, bitter and acrid but far from unpleasant. The piss was slicker than water as it ran over me, covering me and I arched back, my face tilting upwards, eyes closed almost enjoying the sensation – okay fine, definitely enjoying the sensation. Being used by these five, being humiliated by and servicing them. Maybe it was their natural prowess coupled with a dormant desire to submit or maybe it was this damn cage (or more likely both), but as the jock directly in front of me aimed his cock upwards so that his stream struck my face, I found myself tilting my head to soak it all over. My face was still dripping as they finished and walked away, leaving me on all fours. I stayed until they’d left before I cleaned myself off and started my day at uni.

Somehow, I made it through the rest of the week but I am not ashamed to admit I was desperate by the time training came around. I have never run so fast, lifted so much or pushed so hard as that night and I think I even surprised Brian with my results as we shifted significantly off the bottom of the ladder. God I needed to cum! When Coach announced the new losers, I couldn’t help but grin like an idiot. Coach fitted their cages then and there, and told them he hoped their motivation was as strong as it had been for Brian and I. As Coach turned to leave, Brian called out,

“Umm, so you gotta take these cages off now.” Coach smiled patiently.

“But you’re Captain now Brian,” he said as if that explained everything. The confused look on Brian’s face said it didn’t. “Brian, a Captain leads the team but is still part of the team, I expect you to help every member of the team. You helped Peter so well last week, it’s important for you to continue to show solidarity with your teammates. You’ll stay locked until the entire team is up to scratch.” Brian’s voice actually wavered,

“Errr, Coach, what about me?” I asked quietly. Without turning back, he casually noted over his shoulder,

“Brian has the keys to your cage Peter, I think we’ll leave those with him for now. You really did improve this week.” I gulped and glanced at Brian but he was apparently too lost in his own horniness to realise he’d been given apparently perpetual control over me. I needed to impress him, and fast! 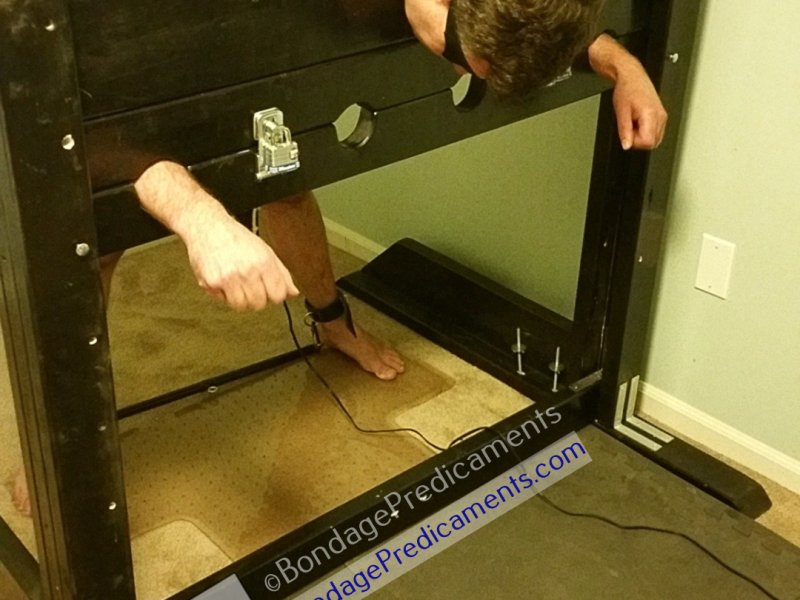