Jason: “Certainly! It only takes about 30 seconds to switch them, so not a problem.”

Ben: “And could you shorten that chain a bit? I want him to really know what it feels like to be constantly gagged with a big cock.” 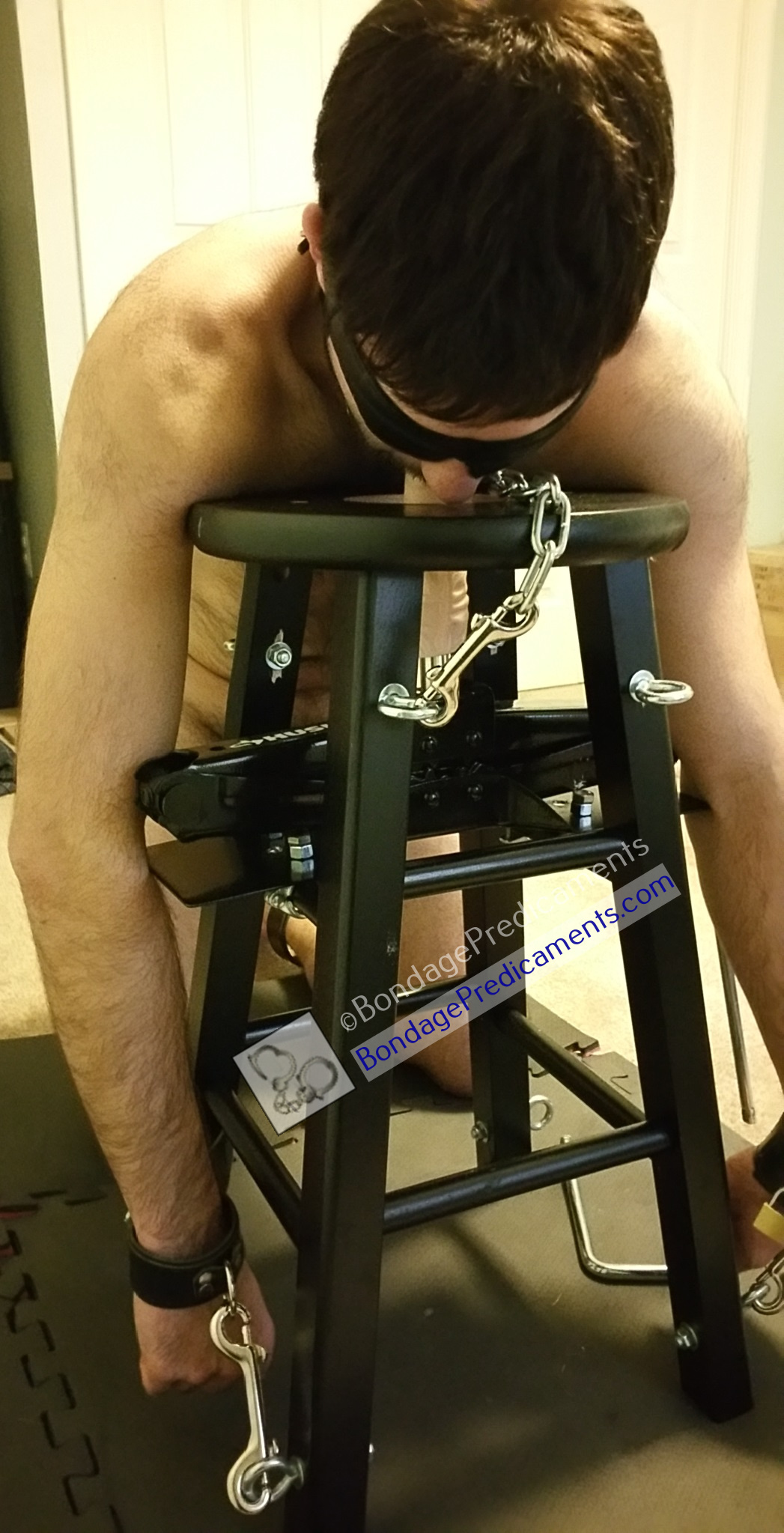 Ben: “I’d really like Chad to fuck him, but could you make it extra rough on him?”

Jason: “Really? You’re asking if Chad can make something extra rough? Rough is pretty Chad’s default mode of operation when it comes to this kind of thing.”

Ben: “Yeah, but if you could make it even more rough, a bit worse than usual, that would be great.”

Ben: “And I’d like the only lube he gets to be from his mouth, just like I had to deal with. But he only gets 15 seconds to lube your dick with his mouth instead of the 30 seconds I got.”

Ben: “And he only gets to use his tongue, no dick in mouth, just what he can do reaching his tongue out and lapping at your dick.”

Chad: “Sounds nice and evil, I love it! Anything else?”

Ben: “Not for that part. But after, I want him locked in that chastity device. It looks like some pretty thick steel, and I’ll bet it’s really heavy. I don’t want him ever forgetting that his dick is owned by someone else.”

Ben was pointing to the Master Series chastity device.

Jared felt a new level of humiliation. He was only given an opportunity to lick Chad’s dick for lube for his ass, not even suck it, and now Chad wasn’t even going to put his dick without Jared’s reach?

Chad: “You do realize your tongue is providing the only lube you’re getting before my cock goes in your ass, right pledge?”

Jared closed his eyes, trying to get this out of his mind. He couldn’t believe that the tables had turned on him like this.

Chad: “And you do realize you’ve only got 10 seconds to lube up my cock, right pledge?”

After he showed some effort, Chad leaned in a bit more. Jared took full advantage of that and was lapping at Chad’s cock like it was an ice cream cone. Even more humiliating for Jared? Hell yeah it was. But it was his only opportunity to avoid making his ass pounding just a little less torturous.

Chad: “Get ready for your practically dry fucking, pledge. Don’t you wish you would’ve gotten to work immediately and not wasted those valuable 7 seconds? Hahaha”

Jason: “Not a very smart pledge, are ya? You’ll learn to do what you’re told immediately around here, especially when Chad is giving the order, or opportunity to make things a bit less uncomfortable for yourself in this case.”

Ben: “Can I come up with some rules for him? Or even more of a game?”

Jason: “Sure, whatever you want, you’re in charge of Jared’s predicament right now.”

Ben (looking at Jared): “Ok fucker, listen up. This is how this is going to go. You enjoyed making me suck your big cock, making me take all of it, gagging me with it, all of that. Well now you’re gonna fucking pay for all of that! Chad is gonna pound that extremely vulnerable hole of yours, and without much lube since you half-assed that opportunity. While he’s doing that, every time you make a sound, I’m gonna crank this dildo deeper into your mouth. I expect absolutely no moaning, no ‘Ouch’ or 'Ahh’ or cussing being muttered, not a sound. You’ll take it and deal with it with no audible realease or way of making it any better. Got it?” 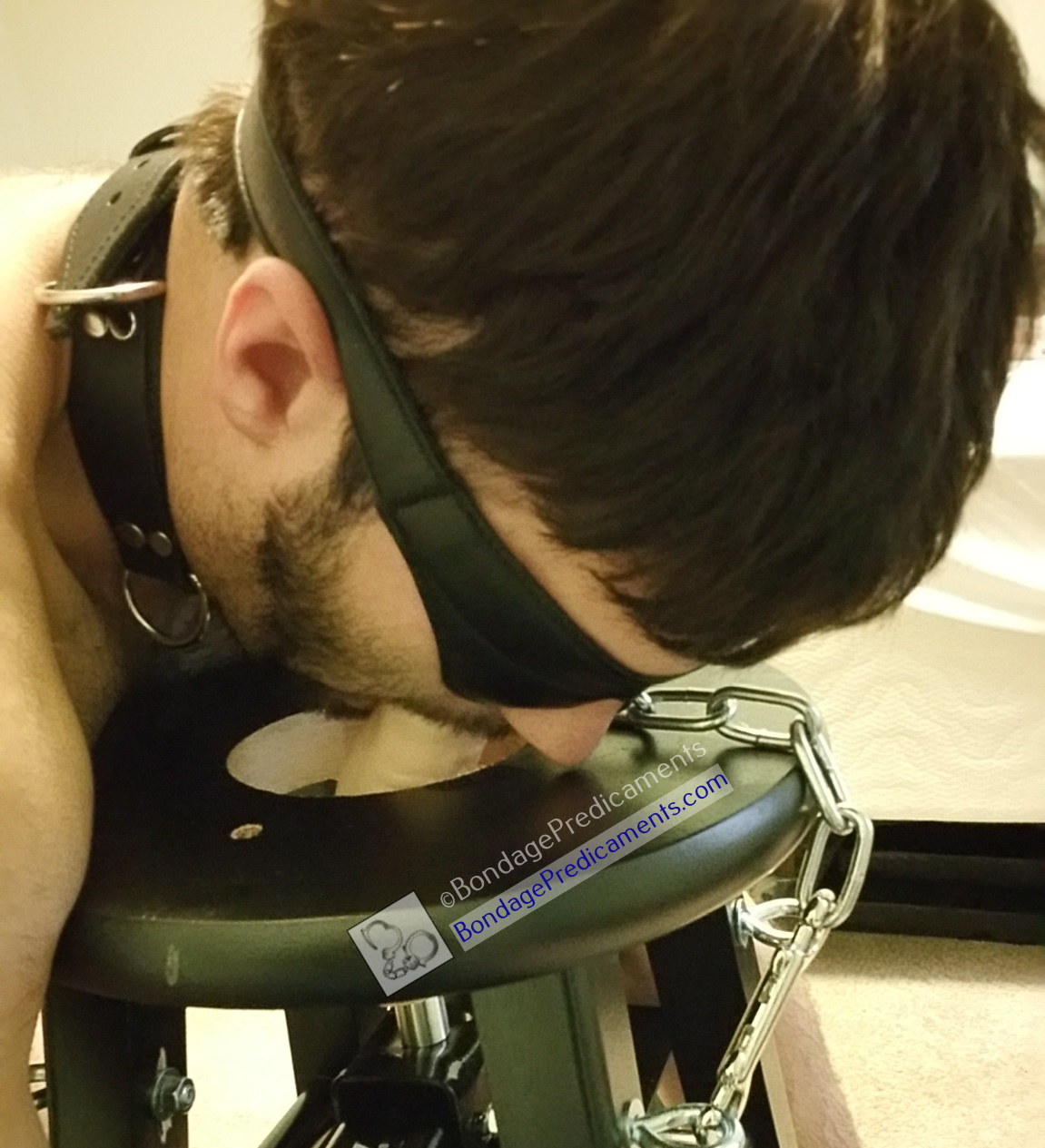 Chad wasted no time in going to town on Jared’s hole. He went from easing into it one second, to a vigorous, relentless pounding the next. After all, Ben did ask him to be rougher than usual. Giving Jared no time to adjust or get used to his cock would do just that.

Ben: “There’s that F word again, even though it didn’t sound like it.” 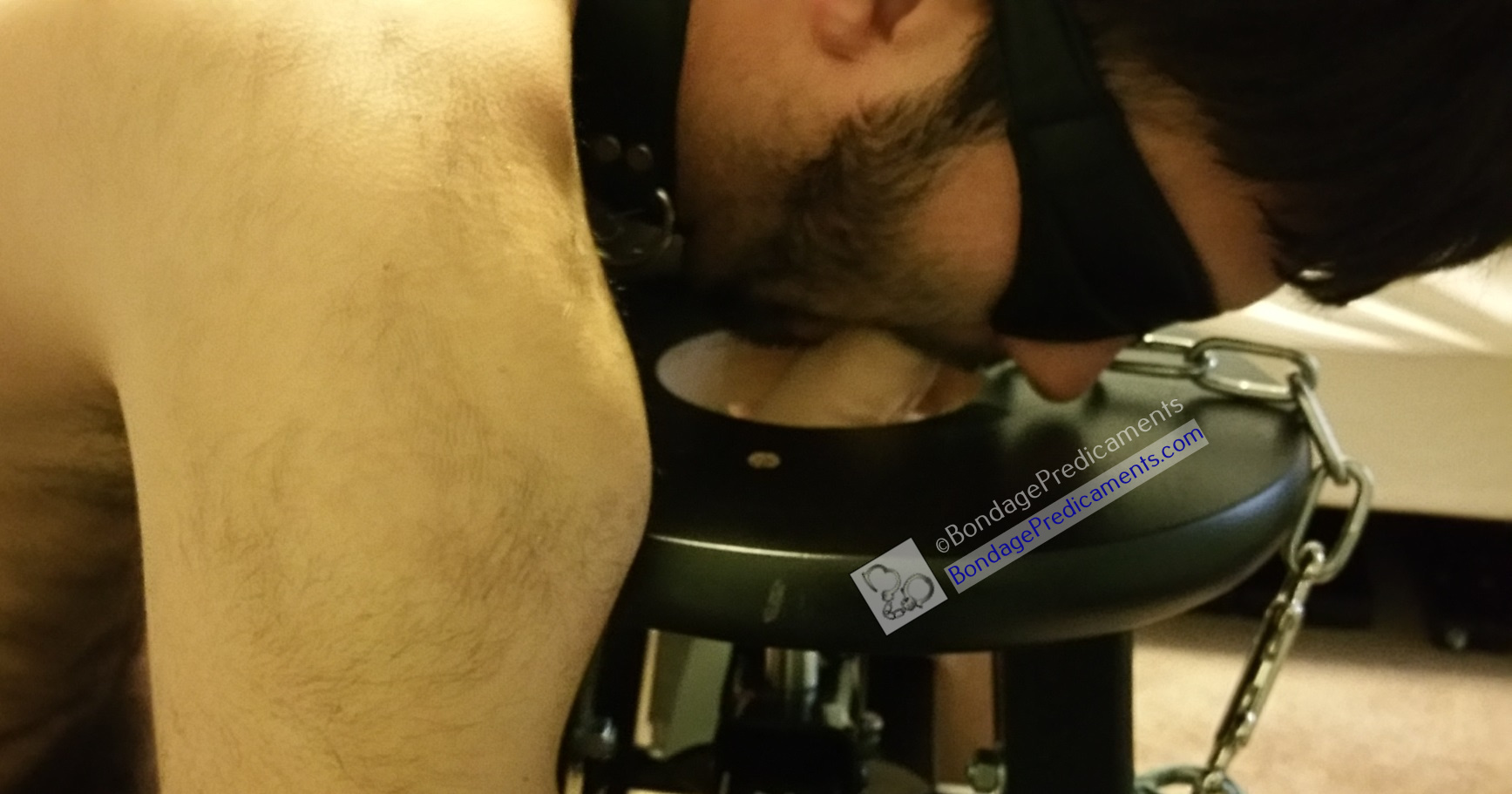 Ben: “Chad, could you go in and out a little deeper each time? All the way in and almost all the way out every time?”

Ben: “And when you thrust in deep, could you slam your cock in really hard?”

Chad: “Definitely. I like the way your mind works, pledge.”

Chad immediately started slamming Jared’s hole, harder and deeper than before. On the first slam in, it definitely got a reaction from Jared.

Ben once again reached for the jack handle and gave it another turn. Jared pulled his mouth up as far as possible. He had no other choice, it was either that, or gagging, and he was pretty sure gagging would be punished with additional cranks since it would be considered a sound. He pulled up as far as the ungiving chain would allow.

Ben: “Keep pounding Chad, I want this little fucker to fully realize what it’s like to have his ass pounded while his mouth is impaled on a big cock, and gagging on it too. We haven’t gotten there yet, but I’m pretty sure he’ll be gagging soon enough.”

Ben: “ANOTHER sound? Haven’t you learned yet Jared?” 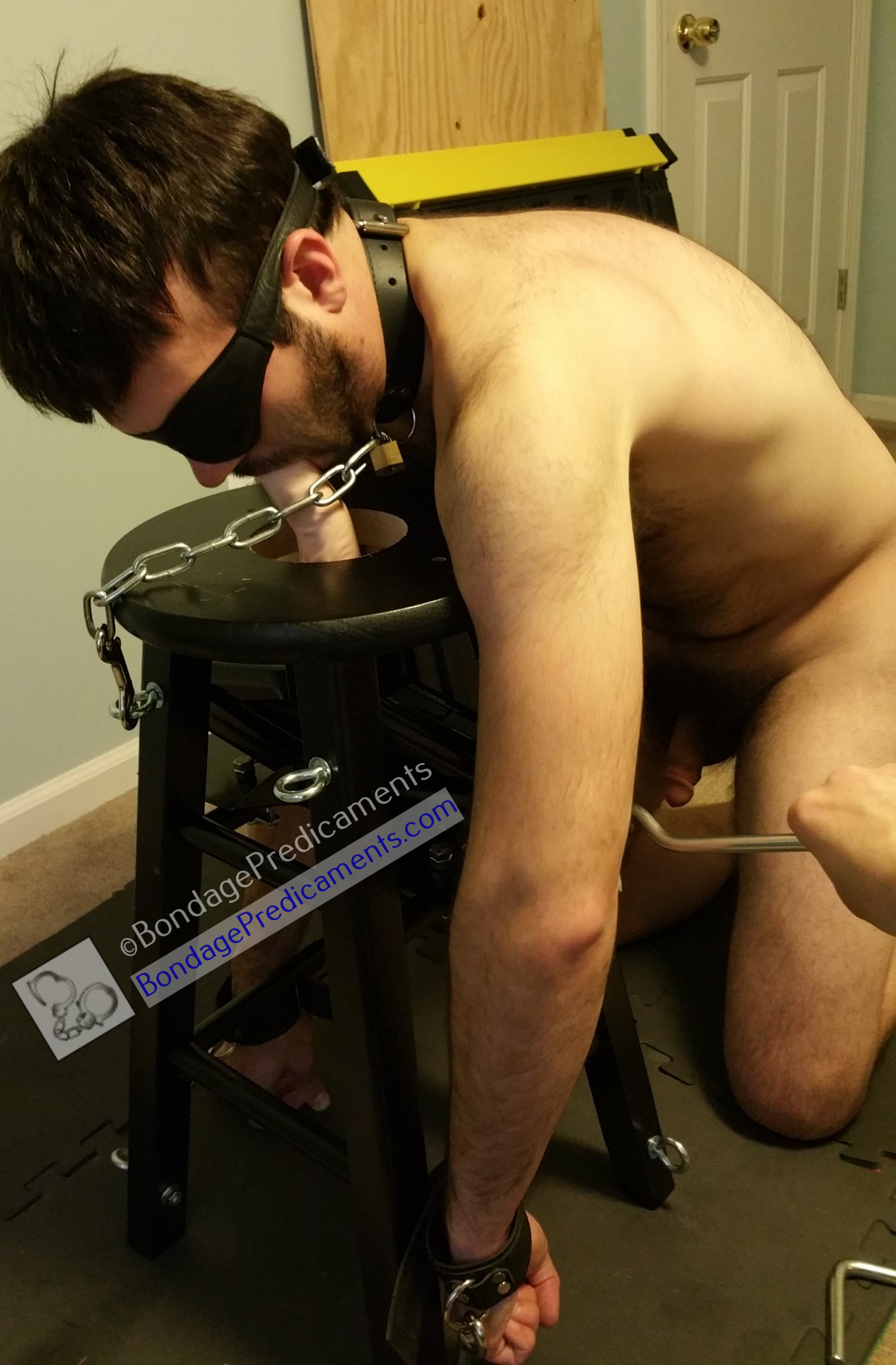 Ben: “What do you think, Chad? Should I give it another crank?”

Jared feared the worst. He knew Ben basically has his balls in a vice and was desperately hoping he’d be merciful on him.

Finally, with no time remaining, Mike blurted out his answer.

Chad: “Did I stutter, pledge?”

Mike: “Did you really mean all of that?”

Chad: “Yes, I meant all of it. Sounds like you’re having a hard time understanding the rules, pledge.”

Jason: “Maybe we should list the rules out for him, to help him remember them?”

Chad: “I like that idea. Go get me a black marker.”

Jason: “Jason paused for a second, not sure about what Chad had in mind. But he knew whatever Chad had up his sleeve, he would love having a front row seat to watch it.”

Jason returned with the black marker.

Chad cuffed Mike’s hands behind his back while he was kneeling on the floor. He used some rope to further secure him in place.

Chad: “Pledge, I’ll give you once chance to see how well you remember the rules. Jake, he’s all yours.”

Mike opened his mouth wide to receive Jake’s dick. He seemed to be on his best behavior sucking it as if he actually wanted Jake to enjoy it, which was quite an attitude change for Mike. Was this pledge finally being tamed?

Jakes cock was getting harder. When it was pretty rock hard, the thickness was more than Mike could  handle.

Jake: “I just felt your teeth, pledge! Big mistake. You just lost a point from the maximum you can earn, and I’ll continue to deduct a point every time I feel teeth.”

Mike continued sucking, trying to keep his teeth out of the way. He was so focused on this that he wasn’t going down all that deep on Jake’s cock.

Mike tried going down a bit deeper, but focusing on keeping his teeth off of Jake’s thick cock was already proving to be extremely difficult.

Jake: “I’m deducting another point for not going down deep enough. I said DEEPER, pledge!”

He did pretty well for about a minute, but then Jake felt it again. This time it was worse, as Mike’s teeth scraped along Jake’s cock.

Jake: “That’s just got you another point deducted. I see a pretty humiliating trip to class in your future, pledge.”

Then, Jake felt Mike’s teeth for the third time.

Chad: “Pledge, I want you to take Jake’s load in your mouth, but don’t swallow. Hold it in your mouth for further instructions.”

Jake finally shot a huge load into the pledge mouth. Mike lowered his head in disgust, and most of Jake’s load spilled out. He even spit some more out.

Chad picked up the black marker and started writing the rules on Mike’s chest.

Chad: “There, now all you have to do if you forget the rules is look down, or ask one of your fellow pledges to read them to you when your shirt is off, haha.”

Mike had a defeated look on his face. 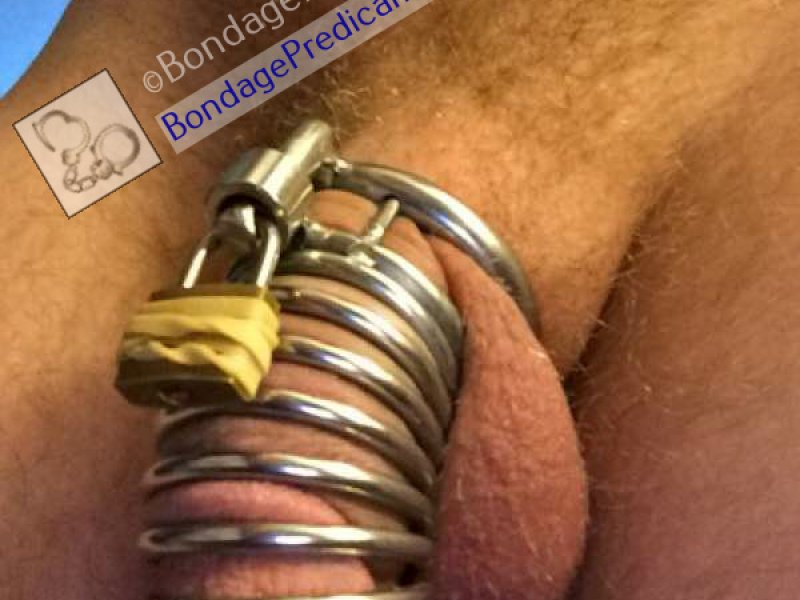